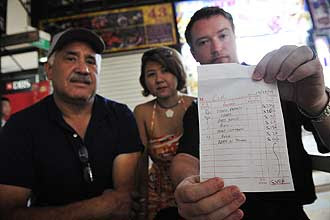 Tourists (from left) Sal Rubio, Dewi Rigby and Michael Rigby claim they were fleeced by a Newton food centre stall on Saturday. They paid $491 for a seafood dinner for six. -- ST PHOTO: MUGILAN RAJASEGERAN.
For full story click here.

(Reason I blog about the above is because the tourists may have been our (SIA's) passengers....hey I got SIA shares and am concerned too..hehehe).

The part that irks me was when questioned about the bill the hawker
"Seconds later, the man returned with four others, who he said looked to be in their 40s and well-built". Was the hawker trying to intimidate the tourists? Rough tactics should NOT be condoned in Singapore. S'pore Police Force should take note of this mafia typed approach.
It's sad that Mr.Rigby the American who comes here regularly told his newbie friends "how safe, clean and honest this island city was" and got .....
The above reminds me of the durian scam in Geylang where people had been overcharged.
I wonder how many cases of overcharging went unreported.
Mr. Rigby don't be so naivee because there are cheats in every country and S'pore is no exception.
Here is another case of complaint of overcharging

1 big lobster around 3lbs only $20 he he
frozen mongtong durian 99 cents a lb, better quality than what I could get in Singapore leh.

Wa leh Singora where do u live huh? Must be stikaporean living in canada right? Anyway thanks for the info.