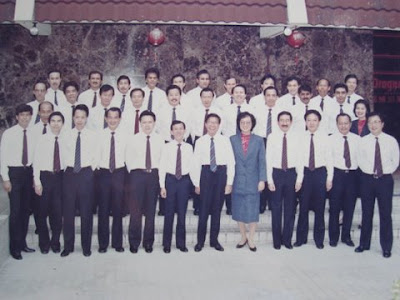 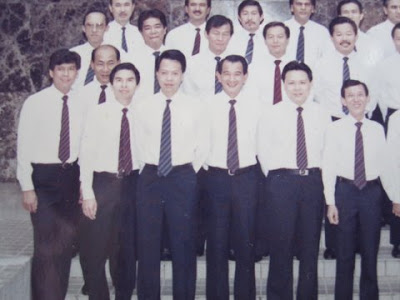 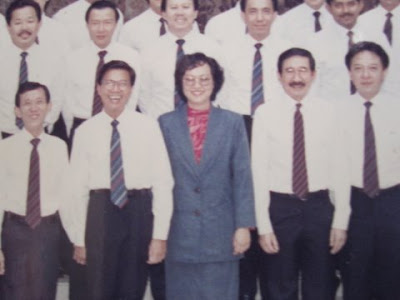 Does SQ get thais as cabin crew?

all the big wigs... some very political and have caused absolute misery to many.. effects which are still being felt till today.

May each of you live long and have thousands of grandchildren to continue the poison.

Above 2 Comments came from those who had licked their b**** and now cursing them.What gratitude! Typical of cabin crew!

From the comment by Always grateful me, there are bound to be ppl who will bootlick in any organisation (like U)as there are assholes "upstairs" and assholes "downstairs".
Respect ! Yes !
Bootlick or Asslick like U ! No Way Man !

I am and was not a cc with sia. I am shock at the attitude of the people who commented here(presumbaly cc of sia). They seems to hate those in the photos who were their seniors. Since these seniors have retired they now openly degraded them. If they are honest and good people they should not hide under "annonymous" but use their real names then I will respect them and not otherwise.

It looks like SQ cabin crew are a disgusting and ungrateful lot (judging from their comments about their seniors). I believe these seniors were the ones who took them at the cc interviews and groomed them only to be told later that they were "assholes" etc. I won't want to part of these scums (SQ cc)

Once upon a time, the serving forks and spoons were recycled on board the aircraft, unlike nowadays when all the equipment is carted off and sent for washing.

These serving forks + spoons had to be washed by the crew, usually the Flight stewards.There was a bottle of detergent supplied to do this.The brand of this detergent was called "Bingo!"

Some very senior crew including the chief stewards and senior chief stewards ( now called IFS )
insisted that it was not required to rinse the serving forks + spoons
but just to wipe them clean.

One day, this was referred to a administrative officer ( in those days, this was the 'executive's' tittles: AO)called BJ and he supported the practice.The person who brought this practice to light was a junior flight steward who felt the practice was unhygienic and perhaps may cause problems for pax and the company.

This was not appreciated by BJ and the steward's appraisal had additional notation that described the steward as " argumentative", and "arrogant". This notation in the personal records still appears.

There are lessons from this:

A) In SQ's formative years, the
senior crew had tremendous
support from management.
Whatever decisions that they
made was seen to be justified.
( the union played along too)
The effect: Ranking crew were
tyrants and some standards were
raised, such as heating bread
rolls ( when no warming cabinets
existed )for all 326 pax.

B) The management will use past
performance records dating more
than 5 years old to decide on
promotions etc. The AOs were
custodians of these records and
were evil enough to use this to
punish young workers.
The effect: Many older crew hate
them and that includes the
higher management and the Union,
which chose to do nothing.

Who am I? an old crew who still has fire in the belly.
Why anonymous? I live in fear that my employment is not extended.
How? the underlings of these AOs are still in cabin crew and they have access to these records and they can still cause misery to people under them.

Have you ever heard of any of these CCE ever being sacked?

They are king of the island.
Bow and submit.

Senior crew you are a bloody coward.It's easier for you to condemn the retired seniors and hide under the skirt of anonymity than to reveal who you are.
Sure there was a CCE called Eric who was sacked as well as Darrel. I think you are too junior to know about how SQ cc culture started.

I retired from SIA CC recently after having served 35 years.So I consider myself to be an authority on CC matters. Having worked and played with thousands of CC during my time in SIA, I can honestly say with geat conviction, that those whom I regard as a friend, I can count with my left hand,(the late Cyril Teo is one of them.) This is not to say that I am an arse-hole who is much hated. Those crew and management people who are friendly with you now will turn their backs on you once you have outlived your usefulness. MARK MY WORDS!

Sacrifice your precious off-days and time by volunteering at CC functions/projects like 4Cs and old folks party only because you like doing them. Do'nt do it for promotion or extension of service. Because CC management have short memory. Some of them are "eunuchs".
Let me explain the meaning of "eunuchs". In ancient China, many poor youths who could not make it in the imperial exams and become officials, chose the easier route to serve in the palace by signing up as eunuchs. To ensure that these eunuchs did not impregnate any of the palace ladies or maids, they had to have their testicles cut off.

CCE Eric was sacked becos he was high flyer and did not conform to the senior ones. He was the first batch of graduates to be inducted via super highway and this system was a threat to the existing status quo. His misdeed was not unusual. Worst acts was committed by the seniors in the picture. LON: "farmer's daughter" case. TPE: TV smash up case. BKK: liquor case, LON: customs case... SYD.. and lots more.. all were tainted.

Darryl was also unfortunate victim of his own act and his fellow AOs did not cover for him. Why? becos it involved JFSS. Thats why JFSS are queens of cabin crew.. they get better pay and they are immune to any accusations.

Yes, I am a coward.. but I also thank "bohtong" for this blog. Otherwise my cowardice will remain unknown.. some of the older CCE are still in cc.. some in other divisions.. all remain employed because they suck up to management and are good at political techniques. They are survivors.
They will ensure that their retirement is secured. To do that they will stab and step and plant seeds.. that is their life and that is what they are accustomed to.
Happy New Year.

There is a difference between Motivation & Manipulation.

Motivation: to inspire others to do
things on their own free
will.To encourage &
nurture.

Manipulation: to encourage others to
do things that will
benefit you. Half-
truths and lies.

This is what is happening in CC. and thats why there is this climate of: "I will only do what I need to do to survive."

Motivation of going to Houston, London is still there. but thats it. How long will this allure last?
The executives are doomed to repeat their mistakes because they believe in MANIPULATION.

How about the union? ah!.. its just a dead horse.. its got a broken leg and cannot run.
Someone please shoot it.

Yes! Cyril Teo was among the best manager, colleague, friend and human being! he always made time for people. He made a difference.I will always remember him.

There were others who were decent people with values that reflected their upbringing. Some: SJL, Ong LH,
Lambert Y.

Some were tainted by past.
Some were outright evil.. these should go to Afghanistan, they will be very comfortable there.

Everywhere is the SAME!

So true!. misery is created by ourselves, but the executives will "facilitate" your demise!
All the volunteering and charity that we do is forgotten.

Remember what happened to Eddie B?
His interview for extension came and he was not extended. When he mentioned that he had contributed many years to the old folks parties under the name of SQ, the managers could not find any record of his participation!

Despite having pictures of himself helping out at old folks events appearing in the Co's in house magazine "Outlook". His participation was doubted! And anyway, the criteria for extension is not dependent on your volunteering spirit. Its a goal post that changes.

They say we must change. Change is good. Yeah!.. change.

Take a good look at some of the CC who got promoted very fast and never did a honest day's work except when the boss is around. They also seem to never get into trouble. I bet you their motto is:
Don't work hard, try to work smart but always angkat!

Since leaving SQ I have been hearing many stories of seniors being reported for even the slightest thing. It makes me glad to have left at the right time. This sorry state of affairs is bad for morale. Everybody constantly looking behind his shoulder. The juniors think they can take advantage of a bad situation. Well they are wrong. Can they guarantee that they will not get into trouble one day? Who is going to bail them out when that happens?

All senior CC and oldies have to wake up from their slumber. The NEW CC Culture is here - Junior is King. As long as TPT is SVP of CC, he will protect all the junior crew as he need all the feedback against the senior crew. Never mind if the service standard has drop and is dropping. Just need all the feedback so can kick all the oldies and senior crew and save lots of money. Look at the channels existed to F**k all the senior crew - UFS, Whistleblower channel, CCN, Feedback to Wardleaders, etc..More channels will be open up using infromation technology so that the oldies who dont now ablut computers cannot use them. So all seniors and oldies, wakey wakey..

King of Junior you may glorify your days now!

Your time will come!

Let us see how long you will sustain.

My goodness!!!What a poisonious vipers we have these days in CC. Thankfully I think only 5% of the junior crew are wicked and vinditive as I had retired (till 60) and have the pleasure of flying with so many junior crew who are simply very nice people who had made my job so easy with their commitment and hard work.

It's not too late to start praying and change to a better person rather than being bitter with the senior crew.If you are unable to be corrected, even if you will be flying for 30 years you will never learn.

You will have more problems with pax,cockpit crew, cabin crew, ground staff if you are to be promoted to IFS if you don't change your attidtude to life.

Please be polite in your comments
Comments must be related to the post eg: If the post is about chicken please do not talk about ducks
Do not be long winded, get to the point
No personal attack on anyone
Do not promote hate speech comment
Do not be racist in your comment
No ads allow
and any other comments the administrator consider harmful,hateful, unproductive etc.