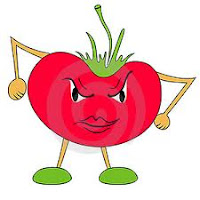 His nickname was tomato face. We shall call him TF. He was already a senior steward when I joined the airline. TF was about 2 years older than me. He was always on the lookout for new crew to bully. He reminds me of the character "Ah Huat" in the TV series of "Fighting Spiders" who was also a big bully.
I remember how the new crew both stewardesses and stewards were so afraid of TF. He was notorious and would asked difficult questions pertaining to work. If one could not give him a good answer,he would shout and scold them. Sometimes,giving TF the correct answers would also get a severe scolding from him.
Whenever we got our rosters,we would quickly keep our fingers crossed and prayed we did not have to fly with TF. But back then the cabin crew were numbered something like less than a hundred. We had not much of a choice because one way or the other,we had to fly with TF.
The night before the flight with TF would usually be sleepless. You would look through your work manual and also find out from those who had flown with TF what were his favourite food and drinks.
If you boarded the flight and not knowing what TF liked to eat or drink your life would be miserable throughout the tour of duty.

I remember how the new crew, both stewardesses and stewards were so afraid of TF. He was notorious and would asked difficult questions pertaining to work. If one could not give him a good answer,he would shout and scold them. Sometimes,giving TF the correct answers would also get a severe scolding from him.

The reason he was nicknamed tomato face was because he had a chubby round face with rosy cheeks. With his rosy cheeks one would think TF was cute looking but he wasn't. He was in fact an  angry looking tomato.
One day, I had the misfortune of flying with TF. Since it was my 2nd or 3rd flight naturally I was slow in dishing out the service to my passengers. My passengers didn't complain but TF seized the opportunity to chew me up. Besides being abused verbally, TF threw a plate at me in the galley. It broke into pieces and he ordered me to pick them up.
It was not that I nor my peers were afraid of TF. Most of us new stewards were either ex policemen,prison officers or from the uniformed branch. We were tough guys as compared to TF who became a steward after he left school. We were concerned about losing the stewarding job and hence tolerated TF's bullying attitude.
If TF was someone from the outside world, we would have broken his neck for being arrogant and a bully.
One of my peers was kicked by TF for not chilling the fruits on the flight. He was also verbally abused and  given a bad report. There were others who were also shouted at but they just tolerated TF.

Those were the days where you could be verbally and physically abused by your seniors. In schools for example, the teachers were allowed to cane and slap the students. It was the practice of the day.
I had a primary school teacher who would disciplined us by using the rulers and his palms. He would slapped us if we misbehaved. Our parents wouldn't dare to complain to the ministry.
One day a classmate of mine who was slapped by that teacher,punctured his Morris Minor car tires. The same teacher later on had acid splashed on his face by the illegal hawkers whom he tried chasing away from the school compound. Subsequently he died from his wounds.

A few of us wanted to beat up TF for the way he treated us. I think TF got wind of the plan and before we could whack him,he became nice to some of us.
TF was good to those juniors who were tough and also those who would join him in his drinking,gambling,smoking and womanising.
During stops at oversea stations, TF would introduced women to us. He had a wide network of woman friends especially the Caucasian women whom he would bribed with whisky and brandy. These women adored TF because he always bought gifts for them. They would obey TF and slept with which ever crew he asked them to.
TF was also very persuasive with the management people in cabin crew too. He would get the flights he wanted for himself and his so called friends. To cross path with TF would mean "suicide",unless of course if you have the muscles to challenge him.


TF was influential in the cabin crew department. The management people listened and took his advice in most matters. He could decide your fate in terms of promotion and hiring and firing. This guy really baffled many of us. Some said TF exerted his powerful influence through the use of black magic...but we did not really know. Somehow, I began to come under TF's influence and he liked me. Well if you were a sports person eg. a good footballer, TF would favour you for he was the cabin crew football team manager. The team was the strongest in the company and TF was proud of it.
Let me illustrate to you the influence TF had even over the overseas staff of the airline.
In 1977 a group of us were assignment to travel to Seattle to familiarise ourselves with a new aircraft type which the company wanted to buy. We were to spend about a week in Seattle. TF had a hand in choosing the crew who were to do the assignment. I was one of the team members.
We travelled as passengers to Tokyo from Singapore on a JAL flight after which we had to change flight to Seattle. We complained to TF who was the leader in charge of the group that the trip would be too tiring and for us during our flight to TYO.  He listened and collected all our airline tickets. When we arrived in TYO, TF spoke to our ground staff and voiced our concern. He managed to get all of us a flight to Honolulu,Hawaii instead. HNL was not in our itineary but TF used his influence to convince the TYO manager that we should go to HNL. With the co-operation of the TYO staff, we all flew to HNL and spent a night there.
The "happenings" and what TF did in HNL was unbelievable ....continue soon at the front page dated 6/6/12