The seven-storey Nex Mall, located next to Serangoon interchange station, has over 600,000 sq ft of retail space. It is about the size of Ion Orchard and is the largest suburban mall in the north-east.

A spokesman for NEX Mall said rival brands – such as Cold Storage and FairPrice – will appeal to different types of shoppers.

The Nex Mall will also have two foodcourts, Food Junction and Food Republic, ‘to offer more food varieties and choices for family shoppers’, its spokesman said.

Food Junction will run a 17,000sqft foodcourt that can seat about 500 people, while Food Republic’s 6,500sqft food atrium will seat about 250 people.

It hopes to draw about two million customers each month. To do so, it is introducing a number of new concepts.

Department store Isetan, which is opening its first outlet in 14 years, will have a section dedicated to handbags and fashion labels from Japan.

Its spokesman said the merchandise mix at its new three-storey outlet will be better than those offered by malls in the vicinity. For one thing, it will have more than 14 cosmetic brands not available in those malls, he said.

Guardian pharmacy will have its first private patient care counselling room for its clinical pharmacist to help patients better understand their medication and draw out treatment plans for those with long-term disease or weight issues.

There is a retail and food zone that operates on extended hours till about 2am.

Dog owners can also make use of the 2,000sqft dog run located on the roof garden. The run is the first in a Nex Mall here, and is meant for dogs to exercise and play in an off-leash environment under the supervision of their owners.

The run can be accessed via designated lifts and escalators. Dogs, however, are not allowed in other areas of the Nex Mall.

To cater to families, there will also be a children’s playground with dry and wet interactive play equipment, and 11 nursing rooms for mothers – more than any otherNex Mall 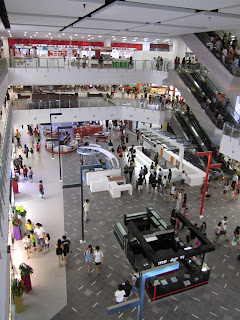 some negative reports on car-parking

I wonder if the parking situation at Nex Mall is worse than that at Tampines Mall and Tampines One?

Anonymous said...
I wonder if the parking situation at Nex Mall is worse than that at Tampines Mall and Tampines One?

I parked at the URA carpark which is next to NEX and it was almost full yesterday(Tues pm off peak) KNN!