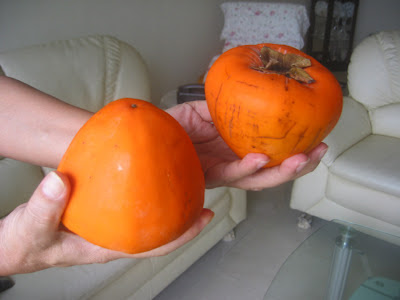 The above are Japanese persimmons and each weigh about 500 grams 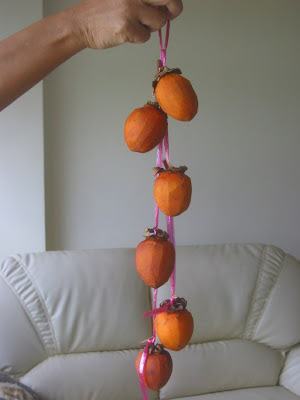 Scientific name: Diospyros kaki
Origin: China or Japan
Varieties: Numerous, varying in size, shape and flavor, depending upon where they are grown.
Tree: height up to 6 m
Fruit: diameter: 6-12 cm
Season: October thru December, and most abundant during the month of November.
Persimmon is a deep orange, waxy fruit which is similar to a tomato in shape. This fruit gets its name from the Algonquin Indians who formerly lived along the St. Lawrence River of eastern Canada. Persimmon is native to China, and was introduced to Japan. The Japanese consider it their national fruit but it is more properly called Oriental rather than Japanese persimmon, since it is not native to Japan.

Persimmons which have dark-colored flesh are always sweet and non-astringent and should be eaten before they become too soft. Varieties with light-colored flesh have astringent taste until they soften. The astringent taste is due to the presence of a large amount of tannin, the same substance found in tea. As the fruit ripens and sweetens the tannin disappears. Ripening can take place just as well off the tree as on. It is advisable to remove the skin before eating the flesh which, too, is bright orange. The fruit has to be harvested with care, and not be allowed to ripen and fall from the tree, because this would bruise the very tender and soft fruit. The best way to remove the thin skin of this fruit is by placing it under running water while scraping off the skin.

Hachiya is significantly larger (up to 3 inches in diameter) and heart-shaped. It is hard and bitter when unripe, but becomes soft, sweet, and juicy when ripe.
Fuyu is a smaller variety which looks like a tomato. It is smaller and is taste sweet without any bitterness and stays quite firm even when ripe.

It is use as a traditional Chinese remedy for hiccups. Take 9 grams of calyx of the persimmon fruit and 3 grams of fresh ginger. Add water and steam for a few minutes and eat.
Persimmon cake is also used as a traditional remedy for diarrhea, hemorrhoids, lung infections and asthma. To make persimmon cake: the fruit should be plucked when the skin starts turning yellow. Peel and discard the skin and place the fruit in the sun to dry, applying pressure frequently on each fruit to gradually flatten it. Continue drying the flattened fruit in the sun or in the open until a white frosting appears and covers the entire surface.
Astringent taste of persimmon can help stops diarrhea, reduces sweating, and slows or stops bleeding.
Persimmons can help prevent cancer because it is high in vitamin A.
It contain compounds known as shibuol and betulinic acid that are thought to have anti-cancer properties.
A study conducted in Japan showed that the peel of the persimmon contains phytochemicals known as proanthocyanidins which may protect cells against oxidative damage associated with aging.