It ain't easy to be a cabin crew but applicants abound 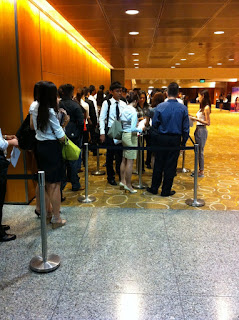 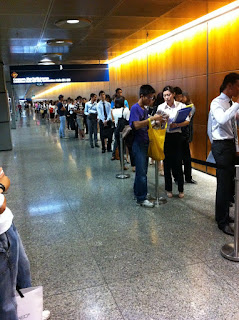 If you think the life of a cabin crew is cushy and the job is easy, think again. To be a cc one needs not only brains and beauty but to be hardworking,pleasing, subservient,an eye for details etc etc.
The salary after all is not fantastic. Most of the income are derived from things like meal allowances, inflight incentive allowance, transport allowance,uniform allowance, bonuses etc. If one is on leave, be it annual leave or medical leave,one would not be paid those allowances. So cc will be paid only basic salary under those circumstances i.e. ranging for a little over $1,000 to $4,000 for the most senior crew.
The work is hard and the hours can be very long. Take the non-stop flight from S'pore to New York by the A345. All in all the total number of duty time from reporting for work until you touch down at New York would be about 22 hours. Imagine cc has to be subjected to different time zones and breathe in oxygen that are thinner than on earth.
Discipline is also very strict. One has to be punctual, neat in overall grooming, respectful of the seniors etc etc. Medical leave (MC) especially "casual" ones are frowned upon. If one was to report sick for a tedious and unpopular turnaround flight then the same crew would be rostered again for such flight. Taking too many MCs would jeopardised one's chances of getting promoted. Then you have to be careful not to invite complaints from the passengers, the general public as well as the seniors or your juniors.
Medically,  a cabin crew in general would not be as healthy as an office worker. Why? It's because of the lack of sleep, frequently suffering from jet lag (no such thing as getting used to it), having meals at irregular hours, fatigue,exposure to cosmic radiation etc. In the long term,life span would be shortened due to sicknesses like cancer, heart problems,diabetes, severe backaches etc. The longest a cabin crew has ever lived was 69 years old (I did not include those who flew for a short while and then worked in the office eg. managers and cabin crew executives). (The average life span of a Singaporean is 81.6 years  but cabin crew is 58 years). He just passed away 2 weeks ago. Most died around 50 plus and they had flown for an average of 30 years (IFS & Chief and mostly male). The stewardesses cannot be included in this group as they would average about 8 to 10 years of flying. Most of the IFS and Chief died of cancer and heart problem. Examples of those who died within the last 5 years were IFS Justin Choo, IFS Rex Pek, IFS David Chan, IFS Kenneth Chan, IFS Derrick Isaac, IFS Philip Voon, IFSs Shirely Wong, IFS Paul Foo, IFS Foo Kwee Pin, IFS WC Soh, IFS Malcom, CS Lester Sim, CS Barry Loo and many more.
More later.............

hi, wouldn't the air in the pressurized cabin still contain 20% oxygen and 80% nitrogen as it is on the ground? Thus, the oxygen level in the aircraft is NOT lower than it is on earth? As for the solar radiation, isn't the flying hours for cc is set so that it is still lower than allowable limits that a human can take? perhaps reduce in life span is due to sleep disorders and stress?

The O2 is lesser in the plane. It's up to the capt how much O2 he wants to pump into the respective cabin. The airplane is pressurized to about 32,000 ft. Thus the O2 in the cabin is thinner as though you are up on a mountain 32,000ft high.

If radiation, lack of quality rest,
dont kill you, being drawn into gaiety will...

and if that fails,

the dependable management at STC will ensure you will not die,

but they will ensure your soul and spirit will never rise again.. of course they dont do it all by themselves lah... the union helps alot.

people are promoted to their level of incompetence - Peter principle is still valid.

You're right that cc job is not easy bt thanks!!

It's a fact that the air in the pressurised cabin is of poorer quality than it is on ground.Viruses,bacteria,dust and other pollutants are the hazards that we face on board coupled with lack of sleep,stress from paxs and crew and an unsympathetic management that only care about their KPI will obviously impact on the health of the crew.
Most senior crew who are sick are usually unwilling to take MC which are termed casual for fear of pushing their cohort ranking to ground zero as this will be taken against them in time of an economic crisis as a candidate for the pink slip.
This is especially so for those who choose family time and have no ECA or time for self directed courses which they have to take on their already tight and precious off days.
Yes,I strongly agree with writer"it ain't easy to be a SQ cabin crew" whether you are junior or senior.
Take good care of yourself and look after each other as a family, this is my advice.
Thank you Mr BT for this forum.

hi, air in the pressurize cabin is not of poorer quality than it is on the ground. The aircrafts got hospital grade air-filter, True HEPA capable of intercepting up to 99.999% of dust particles and micro organisms(unquote). With one exception of turbine oil leaks that go into the air stream. It is quite rare. I still stand firm on my post earlier re.,air in the cabin. Let me tell u, that the air in the cabin still contains 20% oxygen and 80% nitrogen, just like the air you breath at sea level. just that pressure is lower as you climb up in altitude. yes you get thinner air as you climb the mountain. but in the aircraft, it is pressurized, thus the air inside the cabin is the same as the air you breath at sea level.

This chapter was prepared in collaboration with ICAO and IATA and was reviewed by IATA's medical advisory group.

"During all stages of flight, cabin air contains ample oxygen for healthy passengers. However, because cabin air pressure is relatively low, the oxygen saturation of the blood is slightly reduced, leading to mild hypoxia (i.e. reduced supply of oxygen to the tissues). Passengers with cardiovascular or respiratory disease, or certain disorders of the blood such as anaemia or sickle cell disease, may not tolerate hypoxia well. Moreover, the effect of alcohol on the brain is increased by hypoxia."

You are wrong bro...

So cc would have adapted by having more red blood cells to compensate for the slightly lower oxygen in the cabin, just like the people who live in high altitudes.
If so they would be able to breathe better when they are not working.
Still I do not think it is easy to be a cc. I remembered, as a child, feeling a tinge of jealousy when I saw my father who worked as a cc, pampering another kid, when I followed him on a flight.

hmm ok bro, i was wrong, i thought they would pressurize the cabin at 1 bar. i don't understand why they would set the pressure in the bulkhead at about '5-8,000 ft' above the sea level? what are the advantages in doing so? only thing i can think of is they could reduce the propagation of fatigue cracks but wouldn't low concentration of O2 put fatigue on crew and in split second decision makings?

you forgot to mention one other requirement: being nasty to the engineering staff. oh yes, many of us have had just about enough of you CCs "real mature" acts. of course, to be fair, there are those who are nice. but i've personally come across enough of snobbish CCs to come to the conclusion that if you're a CC long enough, you WILL be a jackass.
all talk about stress, unruly paxes, diseases and what-have-you...but you didn't mention the LV luggages you strut around with, or the vw gt that drive to and from Changi Airport, or that rolex you have on your wrist. or the fact that you treat engineering personnel like we're supposed to be at your beck and call. get off your high-horses you myopic, arrogant morons. and because of your union arm, we're stuck with Loga as GS of SIASU. well done you bunch of waiters.