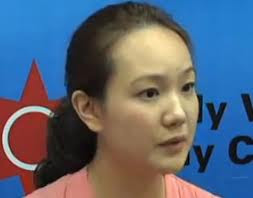 By 9pm on Monday, the 24-year-old opposition candidate had amassed 18,900 fans compared to Mr Lee's 54,000 fans. She had earlier that day overtaken previous runner-up Foreign Minister George Yeo's 18,700 fans, despite the fact that he had a three-year head start.

Only Miss Seah and Mr Yeo are, however, active on the social networking site used by one in two Singaporeans. Mr Lee's page is not actively maintained and has no content other than some background information of him.

Both Miss Seah and Mr Yeo beat other candidates in the online popularity contest handily.

Asked whether she thought online popularity translates into votes, Miss Seah said: 'This is a watershed election for social media, and how this will translate into votes is anybody's guess.'

She is part of the NSP team contesting against Senior Minister Goh Chok Tong's team in the Marine Parade group representative constituency.

Mr Yeo, who took the question at an event at the *Scape youth park, was more bullish. Online popularity, he said, has a bearing on votes.

'The question is, how much?'


BT: If lose election can become stewardess mah and later contest in the CC union election and sure be voted in as CC's union President. Btw CC union beli "luan" and need a Nicole Seah to help them.

Nice Joke BT. I really dont think that would happen as Miss Seah can do so much more than just being CCrew. LOL.

I mean ultimately be CC union leader la...well if she can beat GCT at Marine Parade then she can go on and do better things for S'pore.

ah that is true...I agree with you, whether she can beat GCT is a whole other thing...lol. I only see 2 possible areas for real contest within the GRCS, Aljunied and maybe Bukit-Timah Holland (doubtful about the second one)...but we shall see! :)

Aljunied is a forgone conclusion cos WP will win and win by a big majority.

Joining CC would be an injustice to her abilities.

CC will never allow her room to grow and offer her fullest potential.

CC too restrictive and mechanical.
imagine her cleaning toilets and pushing sales, or deciding to make upilfts of sanitary pads... sheeeesh!

Chris u are right! First of all the buayas will try on her. After that the bitches snr cc will bully her then but who knows she may hook a richie like Robert Kuok or a Capt.