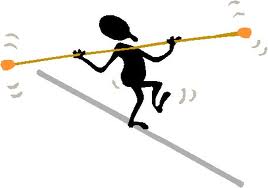 The no.1 man of cabin crew has been transferred out to another division in the airline recently. I hope I am wrong but I have this suspicion that he was transferred out because of low crew and staff morale,the upswing in passenger complaints,high resignation rate of cabin crew, the downgrading of cabin crew to third place in the World's Best Airline Cabin  Staff survey by Skytrax etc.
To run a division like cabin crew is likened to walking the tightrope. It is very difficult to do a balancing act. Firstly, you have got to make sure the operating cost is lower eg. slashing of crew hotel accommodation cost, allowances, tightening of rosters and others to please your big bosses. Second, with all measures like tightening of crew rosters and downgrading of hotel accommodation at oversea stations to save money for the company you would also need to maintain high  crew morale.
All the above belt tightening measures which I have mentioned are necessary because of the fierce competition from other airlines. You either be cost savvy or be left behind in the competition to survive.
In the 1980s, a somewhat similiar situation existed. But it was not a situation of cost cutting that caused the crew morale to drop and passenger complaints to rise. It was the way the crew were managed.
To solve the morale problem of the crew and the senior office staff, the company brought in a respected and affable genaral manger from the cargo division by the name of Mr. Yap. He did an awesome job and passenger complaints dipped to an all time low. Crew morale was once again skyrocketing. As a result, passenger compliments went up so high that we in cabin crew were pleasantly embarrassed. Subsequently Yap was promoted to the position of Senior Vice President or SVP.
I heard a former cabin crew man ( DVP William Koh ) was asked to head cabin crew. Hopefully, with the assistance of Mr. Koh, cabin crew division will recover and be the best in the world again.

Was it Tan Pee Teck? Who is the new man. Sorry for my ignorance.

Ag Chow Kok Wah took over from TPT but din do a good job so now DVP William Koh took over cabin crew.

If we intend regaining our position to number 1 then the best bthing is to get rid of UFS. Let the Ls CS and Ifs do their jobs without threat with crew using the ufs.
Cost will inevitably go up in any business but so will cost of tickets etc.We cannot always be cuttin off from crew.

A)When at 35,000ft and 12,000km from Changi home base.. crew are not allowed to deviate from SOP.. then the service to customers will suffer

B) When crew in charge of each zone is not allowed to tailor their service to the needs of their customers, the service will suffer

C) When management continues to play politics and create distrust among ranks, among pilots and cc the safety will suffer

D) When managers encourage 360degree fedback but without reviewing circumstance.. there will be sour relations.

E) When cost cutting is done with such zeal that each grain of carviar is accounted for.. yet managemnet enjoys a benefit from these savings.. staff will feel sidelined and unworthy. ( PAP style)

F) When management takes full advantage of the union's stupidity
and rams through whatever they want instead of seeing it as an opportunity to win support from staff.

When the union is giving everything like poor cop,poor hotels,more punitive initiatives,more workload to the management for union's ppl promotions.sure die loh.

new buzz word in cc to describe the union is 'no audio and no video'.it is a cmiv failure.just give vouchers.

No wonder always see Tony Sim running along east coast. He is keeping fit so that can be your Union chief till 60 yrs old. CC sure die one.

It very sad for the present Union to adopt this CMIV Failure attitude. One news letter and MIA. CA due more then a year.... Standup like a man and face your members, if not issue an apology and quit, Let others who really can & wanted to serve take your seat.

Choice was elected democratically. No one can do anything, whether they function or not. Just sit tight for the next 3 years and just work hard and stay out of trouble. We got to accept this and move on.

There is no point crying over spilled milk. CC choose through the ballot box, so die die must support them & give them space to run the union as they seem fit.

Send management for CSP class.. cheap.. can get subsidy also.

When you are the No.2 man, you would always appear to be a good man because you do not have to make unpopular decisions. Just carry out any unpopular policies of No.1 and rally-pally with the crew. That way, No.1 thinks you are capable and crew think you are nice. Beware of the smiling Tiger in the year of the Dragon.

this company so complicated. so sad, SQ, nice to see from outside, but it's ugly inside out! sad.

I believe as far as the concept of Cost Saving (aka, Cost Management)...SQ will never be the best anymore...one of the cause of damage into this airlines is the management who is not ex-crew and they will never know what and how the power of wants and needs by the customers.