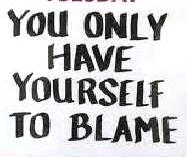 and your parents too!

As a little boy, my mother always remind me  not to blame others if I don't succeed in life. "Don't blame your teachers if your school results aren't good"  " don't put the blame on your employer if you are receiving a low salary"  and she said " don't blame anyone but yourself and as your mother I am willing to share part of the blame too,son ".

When the airline does not make money the blame is on oil prices,competition,market condition etc.
What are the bosses paid big sum of salary for??. Of course to solve whatever problems there might be and overcome them. They are paid to make money and lots of money for the shareholders. Can't do it? Pay me a quarter of CEO's salary and I will come in and help....hehehe.

In the old days, competition and protectionism were so fierce it could cause the airline to shut down. MSA overcame that obstacle. Pressure was put on MSA by the IATA members and other countries tried to stop it from flying on their lucrative routes.
BA and the UK government tried to stop MSA from flying to London in the early 1970's. MSA management fought back and even persuaded some UK MPs to visit Singapore as well as the airline to see for themselves what a sophisticated airline it was. MSA spent millions in advertisements all over UK to convince the British public that it was also in their own interest that MSA be given a chance to fly there.
By 1971, MSA secured the rights to fly to London. It was not only a victory for MSA but for all Asian carriers.
When the oil prices quadrupled in the mid 70's, the shock was so great that many companies went bankrupt. The newly born SIA which is the successor of MSA rode the storm and came out stronger. Why MSA and the newly formed SIA could survive in those horrible conditions? The answer lies in their management and staff.

The cabin crew in those days were much better than their present counterpart. They were hungrier and willing to slot. Today's crew are less hungry and all they want is an easy life on board. They want more money,more rest days and less work. When they can't get what they wanted they blame it on their union....the very poster boys and girls they voted to represent them.

The present union is no better. The office bearers are paid around $3,000 per month each with handsome allowances for phone bills, transport and what have you. The money I've just mentioned is in addition to their salary they draw from the airlines. An inflight supervisor on being elected as a president of the union is paid $3,000 ++ by the members in addition to his monthly average salary of around $7,000.
10 k a month for an O level guy (at most A level) .....wah despite of me being the airline for 35 years and more than half the time being its executive can't even smelled 8k a month.
Sure, when the union can't get what they wanted for its members they put the blame on the management.
A former union president now owns a 3 storey landed property plus a 5 roomed HBD flat which in my estimation are now worth at least 3 million dollars. Mind you, this ex president is a retiree now. I am not saying this ex didn't work hard ( he was president for 20 years) but indeed he had saved hard too.
I can't see how the airline is going to survive under those circumstances.

My main regret is I have accumulated ten of thousands of the airline shares which is now down by a third of its value. I don't blame anyone except myself for being so very naive to pick up those shares.
Newer Post Older Post Home