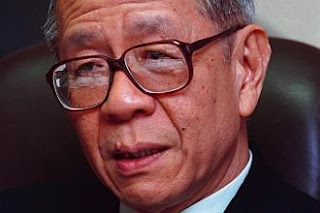 In the early 1970s, I had served Mr. Tan Boon Teik twice. He was our first class passenger who showed concerned for me and my cabin crew. He was also our company's board director.
On a second flight with us to London on the B707, he told me SIA has too many transit stops on the way to London ( 3 transit stops in between S'pore and London). Personally, he told me he prefers a non stop flight to London which was almost impossible at that time. No commercial plane had that kind of range in the early 1970s.
He spent most of his time on the flight sitting in our 4 seater Silver Kris lounge opposite my first class galley. That was where we started to talk more. He asked whether I was happy with my job as a chief steward. I told him I was happy doing what I was doing except for a few things. He asked me to elaborate and I did.
Not long after that flight, my manager was called up by our managing director. My manager was chastised over the complaints written by Mr. Tan. It was regarding my feedback pertaining to many things in cabin crew. One of them was the unjustified reason given to my steward for not promoting him. This steward was involved in a car accident and as a result had a small scar on his face. The manager used it as a reason for not promoting the steward. The steward was working on that same flight where our Attorney General was travelling. He had a good look at the steward and shook his head indicating that the reason for not promoting him was unfair. A month later, the steward was promoted to the leading steward rank.
I have not flown with Mr. Tan since that flight. I will always remember him as a kind and caring person. We will miss our beloved former AG and may his soul rest in peace.

He was a no nonsense boss but fair to all.