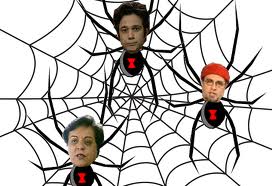 She wasn't well liked by some of the crew who served her on the flight she was travelling as a passenger. She was a supervisor.
The crew in charge of the flight upgraded her to a higher class i.e. Biz Class.
After the flight, the crew in charge was hauled up to the office for upgrading the lady supervisor. Apparently someone had spilled the beans and the company took a serious view of the complaint.
The crew in charge was not the actual target of the complainant but the lady supervisor was.
An investigation was launched and after a couple of months, the company concluded that the complainant acted because his leading stewardess girl friend on the flight prodded him to complain. It was a case of revenge by the Lss because of some past encounter she had with the lady supervisor.
Since it was wrong to upgrade someone the company gave a warning letter to the crew in charge. The lady supervisor was also warned for agreeing to be upgarded.
The action taken by the company would have been more severe had it not for the involvement of the Lss in the complaint.
Such complaint arising from personal vendette is not uncommon.
Some years back I was also a victim of such complaint. It was also a Lss whom I have corrected about work instigated a male passenger to complain against me.
Fortunately for the above case and mine, the company was thorough in it's investigation and fair to the victims.