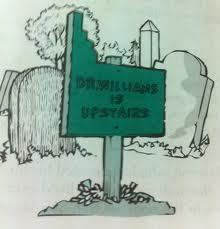 A young man grew up in a very poor section of a large city and decided he wanted to make a difference. So he went to college and graduated with honors. From there he went on to Medical School and would graduate to become a doctor. Upon receiving his degree he returned to the area where he grew up and rented a small apartment over a liquor store where he lived and treated his underprivileged patients. In front of the liquor store was a simple sign reading, “Dr. Williams is upstairs.”
He treated many patients during his lifetime and would become one of the most loved persons in that city. He devoted his life to those who would otherwise have no medical attention. When he died, the doctor had no relatives and no money left for his burial. He had never asked for payment from anyone he had ever treated and most paid very little if anything. Friends and patients scraped together enough money to bury the doctor, but they had no money for a tombstone. It appeared his grave was going to be unmarked until someone came up with a wonderful suggestion.
They took the sign from in front of the liquor store and nailed it to a post over his grave. It made a lovely epitaph: Dr. Williams is upstairs.