By Zul Othman
The New Paper | Tue, Apr 10, 2012
She gets to travel the world as a stewardess for a major airline.
While the travelling is nice, the 35-year-old – who requests to go by the name Florence because she is worried about her airline objecting to the interview – says the job is far from glamorous.
“Some of the things we do certainly don’t fit with the glamour people normally associate with being a stewardess”, says the Malaysian, who has been in the industry for 10 years.
“You have to deal with difficult passengers and demanding supervisors.”
“Some passengers think because they paid for the flight, we are at their beck and call.”
Once, a passenger threw water at her just because she took 10 minutes to bring him another glass filled with ice cubes.
Another time, she had to go down on her knees to scrub the toilet. “Let’s just say a passenger got really drunk and wasn’t good with the aiming,” she laughs.
So how does she deal with all this? “You’ve got to smile and suck it up,” she says matter-of-factly. 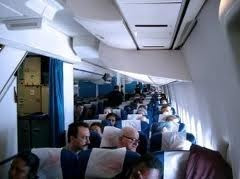 Requests from passengers can range from the mundane, like asking for water that has to be at a certain temperature or requests for more pillows, to the offbeat – like how a passenger insisted that the crew hang up his socks because he was caught in the rain prior to boarding the flight.
But interesting moments are few and far between, claims Florence.
“The good thing is you meet different passengers on every flight but our job can be quite repetitive”.
It’s the same serve-and-smile thing, she says with a grimace.
She confesses that she would not actually recommend her job to anyone now.
“It’s not much of a career progression, is it?” she says.
Previously a teacher in Johor Baru, Florence says she never dreamed of becoming a flight stewardess.
Until one day, she saw a recruitment ad in the newspaper.
She decided to give it a go because “I heard the money was good and I always wanted to travel”.
Her first steps into the job was, in her own words, an eye opener.
“Imagine me, a girl from a small kampung joining a major airline. I was shy and wasn’t very good at interacting with people,” she recalls. 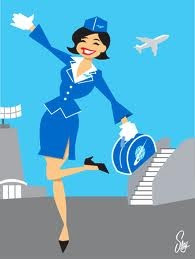 Joining a major airline was a “culture shock”, she added.
“In my first year, I saw flight crew making out on the plane, usually when the passengers were asleep.
“I was very shocked… but now I don’t bat an eyelid when that happens.”
When pressed for more details, she claims it’s not uncommon, but it’s not that frequent either.
Passengers are the toughest part of the job. They get upset, irritable and sometimes very loud – which risks making others more upset.
Her secret to handling the tough ones? Giving out a little more alcohol when they ask for some, so that “they’ll be more relaxed”.
The kind of passengers she dreads are those in business class.
“They are not all bad, of course,” she chuckles.
“But you have to understand business-class passengers are usually your high-powered types who travel for work.
“Sometimes, we get those who clearly had a bad day at the office. On one flight, I had this passenger who was on the phone as he was boarding the plane, calling his office to explain a deal had gone through.”
Florence said she approached him and advised to switch off his mobile.
Displeased, he snapped at her.
“That is why I prefer working in either the first or economy class – these passengers are generally more relaxed on a flight,” she says.
But the most frustrating thing about the job is the lack of a social life.
“You are always overseas and your days off are never fixed,” she explains.
“You don’t have enough time to spend with the family, and you don’t really meet anyone outside the cabin crew circles.”
Which is why so many stewards and stewardesses hook up. Her 36-year-old boyfriend is an air steward.
“When you are abroad, you don’t do much but stay in the hotel so that’s when couples ‘hook up’,” she reveals.
Not all of these relationships last.
Affairs – which Florence claims happen quite often – are a job hazard, especially if a steward is married to another stewardess in the same airline, she adds.
“You can get lonely when you are abroad. Most of us deal with loneliness in different ways – some have drinks with the guys and sometimes, things go too far.”
As for her own relationship – Florence has been with her boyfriend for two years – she admits that it takes some effort to make it work.
“We don’t fly to the same destinations.
“We see each other when we’re not working. Sometimes I’ll try to exchange duties with someone so I can be with him.”
Secrets of the trade
1. Always have plenty of rest. When you are tired, you might get emotional when dealing with difficult passengers.
2. You always work hardest on the shortest flights. When passengers ask you for anything out of the ordinary, politely remind them of the flight time. That way, you’re less likely to be interrupted when you are doing your job.
3. Always pretend to be busy, even when the passengers are resting. That way, your supervisors might think you are preoccupied and not ask you to do things you don’t want to do – like washing the toilet!
This article was first published in The New Paper.

BT: Aiya dun pretend la cos flying is still good besides the $$ mah. How many Ringgits can a teacher earn huh? Can get hooked to a steward somemore. Pls dun discourage the wannabes ok...Flo.

Actually their salary very good rite? Can earn $4k and get free travel some more. Want to join but now overage already.

yes 4 to 5k easily a month and that is 11k in malaysian ringgit. This gal can afford to buy a bungalow house with a large pc of land back home.