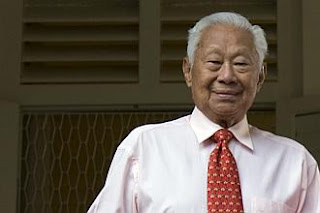 We are saddened to hear the passing of Mr Freddy Lee,the younger brother of Mr. Lee Kuan Yew. Mr Freddy Lee passed away peacefully on Thursday at the age of 85.
I first met Mr Freddy Lee as a passenger on my flight in 1976 from SIN to LON. He was one of the best passengers my crew and I had ever served. Mr Lee was a tall awesome looking gentleman, just like his brother the former Minister Mentor Lee.
During boarding, Mr Freddy Lee asked me whether he could have the "slumberrette" a type of bed in the first class upper deck of the B747. The were only 12 beds available and they were on the first come first served basis. Mr Lee did not made any reservation for the bed.
While he was asking me about the bed, another first class passenger overheard our conversation and graciuosly offered to give his to Mr Lee.
It was a long flight to London with a transist stop in Bahrain. A bed was something all first class passengers would look forward to.
Mr. Lee was wide awake after a few hours of sleep. With another 2 hours of flying time left before our arrival at Bahrain, Mr. Lee invited me to sit next to him and have a chat.
He was a down to earth person with  a friendly personality. He was also quick to make you feel at ease with him. I enjoyed the conversation we had and learned many things from him.
The next occasion I met him was in London a few years later. It was in a Bayswater Chinese restuarant. He was with his friends and family members.
I have not seen him for a number of years and this morning, it came as a shock to read about his passing in the Straits Times.
Dear Freddy (he insisted I call him Freddy instead of Mr. Lee) may your soul rest in peace. 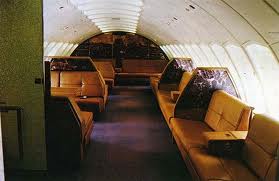 During the long night flights these sofas in the B747 upper deck can be converted into beds or "slumberettes" as we called them . The crew would dress them with bedsheets and provide pillows.

My condolences. Last Fri, I had a premonition that perhaps LKY might be leaving soon so I wrote a tribute to him last Fri. It turned out to be his bro. Life comes to all, so must enjoy life and live a life of integrity.