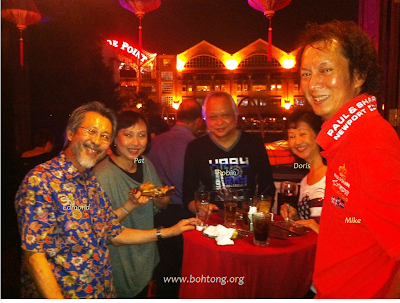 
Last night was the first major ex cabin crew get together. All in all  37 people attended the function at The Forbidden City.
Many of us have not seen each other for many years. We us used to fly together from the F27s to the B747 aircrafts. It was an exciting night really.
We had lots of delicious and yummy food. Tiger Brewery sponsored the beers and
IndoChine Restaurant the wines.
Edmond Tay (with his beard he looks like a  Chinese sinseh...hehe...no offence Ed) and Cecilia Teo (at 50 she is still single,gorgeous and desirable) were the main organisers.
I was shocked to see an IFS whom I thought was long gone. It was rumoured he died in the Tsunami that swept Phuket in 2004. The rumour sounded logical because he spent most of his retirement there (he bought an apartment in Phuket before the Tsunami). We thought we saw his ghost.
We congratulated him for being alive. This guy was the live wire of the night. Let's call him Mick (not his real name). He was one of the biggest gossipers in the airline and he still is. Mick is single and indulges himself with things that make him look good and young. He is rich and two decades ago I was told he had a cool US$ 1 million in his fixed deposit account with a bank. Today,he is worth 10 times more as he had inherited a big fortune and properties from his late parents. Mick looked good even at his age, slim and lively as usual.
There was another ex colleague of ours who could not make it to the function because he has serious kidney problems. He spends 4 times a week at the hospital going through kidney dialysis. He can afford the expensive dialysis treatment as he has inherited a $20 million fortune from his late father. Poor KJ, so rich and yet so poor in health.
One stewardess told us about another whom she shared the hotel room for one whole week and never once seen her washed her panty. If she had, the panty would be hung somewhere in the bathroom to be dried or on top of lampshades. She cheekily told us her friend probably did not wear panty at all. Sure I don't doubt her because I knew of stewards who did not like wearing underwear.
There was another story of how a senior steward met his batch girl (an ex stewardess) working as a mama-san in a lounge. Initially, he wanted the services of a social escort but on seeing the mama-san he wanted her instead. " All along I have been an admirer of yours but now at long last can I have you for the night?" ...he asked her with a big grin on his face. The answer was obvious he told us.
One IFS related how a famous Hollywood movie actress complained to him about another first class pax trying to snap pictures of her. The IFS spoke the pax concerned but later allowed him to secretly carry on taking pictures. At the end of the flight, the IFS was rewarded with a 5k tip.

BT: It's safe here cos the girls are all over 18 yrs old (I will guarantee this)

Great juicy stuff as always
From the man himself Mr BT!

Even though she wore disposables her room mate can see in the waste bin.