Joan was crying over the other end of the phone as she was relating to me how her dad had confiscated her passport. Joan's dad found out that her only daughter, a stewardess was involved with a married supervisor. They were supposed to work on a flight to London but dad refused to let her go.

Without a valid passport, the crew like anyone else were not allowed entry into a foreign country. Joan was in a fix and as a union rep I had to help her.
I spoke to our SVP and he decided to let Joan work in the office for a while.

Ken was the supervisor involved with Joan. She confided in me that she gave her virginity to Ken. She was prepared to be his mistress for life if he did not want to leave his wife. What a stupid girl Joan was!

The office made sure that Joan and Ken would not be rostered to fly together. More than that, they were not allowed to swap flights to fly together. This arrangement went on for almost six months until one day Joan came to see me and told me she had found out that Ken was sleeping with another stewardess.
I was told much later on that Joan married a chief steward. As for Ken, he was sacked for molesting a female passenger.

On the subject of virginity, one of my ex young trainees confided in me that a chief steward took her virginity and left her in the lurch. 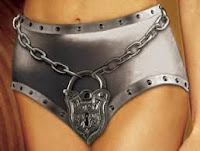 My advice to all parents who are concerned about their stewardess daughters' involvement with the male crew or passengers is not to confiscate their passports but to make them wear chastity belts when they go on flights and you keep the keys.

Hi BT
Sorry to drift from the above topic.

Read this article with regards to the safety & security of pax and passengers.....