When I left SuperiorAir, my beloved former employer, they demaded that I return everything I took from them.

I had to turn over the keys to my office drawers, all the stationery, my uniforms and everything else an employee had to give up upon leaving the company.

SuperiorAir had also asked that I return the house I purchased with the company loan — which I had already paid back in full — and also that I give back the gift they presented to me on my retirement as well as most importantly all the wonderful memories I've collected during my flying days.

They ordered me to keep only the bad memories — those times when passengers shouted, scolded, cursed and abused me and my crew, the several occasions of turbulent weather during which I was nearly killed when I was thrown about inside the plane.

I had to tell them that I couldn't possibly return everything, especially the good memories. They eventually hauled me to court. I was defenseless, without any legal counsel, whereas SuperiorAir had a bench-full of lawyers waiting to chew me up.

After a fiery battle of Boh Tong versus SuperiorAir, the judge turned to me and passed his verdict: “You are to comply with all of SuperiorAir’s demands including returning all those wonderful memories of flying to exciting cities and with friends you've made on those flights.” I was shocked. How could I return those memories, how to erase them ? It was impossible and ridiculous. But I had to comply with the court order.

Then, the judge turned to the SuperiorAir bench: “For your part, you are ordered by this court to return to Mister Boh Tong, your faithful employee of 35 years, one thing: his youth.”

Now, that was an even more impossible request!

And just as shocking was that SuperiorAir agreed with the judge's decision.

During the three and the half decades of my life that I devoted to this airline, I and the rest of the employees were brainwashed to believe that nothing was impossible for SuperiorAir. The sky was the limit, and this court decision was no exception. To return my "youth" to me was a piece of cake for them. Now you know why SuperiorAir was the "Airline that other airlines are scared to talk about".

“Kindly inform the court how you will comply with this order?” asked the judge. The SuperiorAir lawyers discussed among themselves for a while, and then one of them stood up. “There is a private jet ready at the Changi Airport CIP Terminal,waiting to transport Mr Boh Tong back to the day before he joined the airline.” By doing this, I wouldn’t have a single memory of flying with them, the man in the suit added.

Shortly after, I was buckled into my seat on SuperiorAir’s pilot-less Retro-sonic jet, destination: Singapore Paya Lebar Airport, February 1, 1968.

All of a sudden, just after take off,  the jet landed with a loud screech and thud, and I was flung out of one of the jet’s windows and onto the ground. When I came to, I wasn’t in the airport, as expected, but on the floor of my bedroom.

I realized it was all a dream. However, when I walked to the bathroom, I looked into the mirror and saw the man I once was — the energetic 22-year-old me looking and feeling great. Not too shabby for a man of 68.

Then I frantically switched on my desk-top and started to type my story, the first one being.......

So thank you, SuperiorAir. Indeed, the sky is the limit for you! I sincerely hope your share price will too! 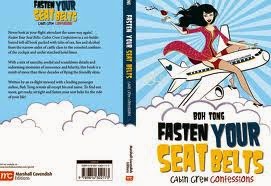