I met the one legged man again

Going for a meal at Serangoon Next Mall is one of my favourite pastime. I was surprise to meet Mark the one legged man whom I have blogged  a couple of months ago.
He was more excited meeting me than I with him. The reason was he wanted to pay back the $100 I gave him. I refused as it was a gift and not a loan. He smiled at me and took a ticket from his pocket which showed he won a handsome bet at punting a horse named "Rugged Cross".  If one is a Christian one would know the meaning of a "Rugged Cross". 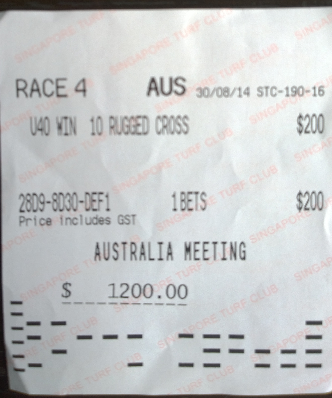 Mark invited me for a meal and we sat down and chat. He was obviously in a good mood despite his handicap. I advised him not to gamble because it's a risky pastime. However, Mark told me he was inspired by the name of the horse and bet on it. He rarely bet or gambled,he told me.

After the meal, I made my way home. I was thinking how the Almighty One is so kind to provide this one legged man with $1,000.
Now before you condemned me for saying God had help Mark acquire the money through punting, I want you to know that the Bible says  and I quote :
"Every good and perfect gift is from above, coming down from the Father of the heavenly lights, who does not change like shifting shadows". unquote (James 1:17 New International Version).

Whenever we are showered with blessings we should raise our hands and thank God.