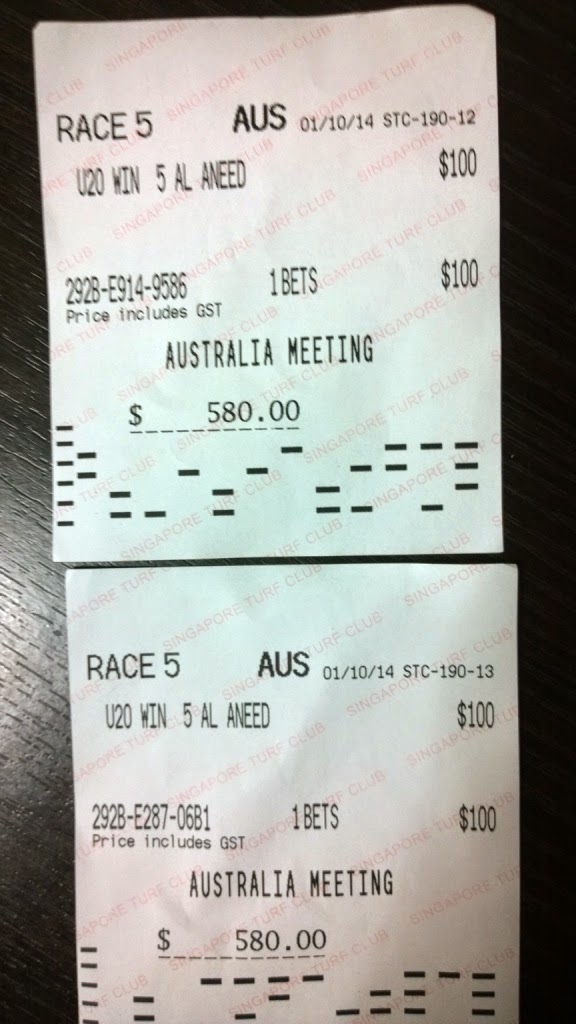 Above pictures showed 2 tickets.One ticket belonged to Ben and the other one was mine

While in Serangoon yesterday shopping, I met Ben the former LS who told me he survived by punting on horses. He was about to enter the betting centre in Serangoon just to punt on one horse when we met. He told me he was given a tip by his friend to punt on a horse called Al Aneed in a horse race from Australia. I didn't know that there is betting on Australian races here in Singapore on a Wednesday afternoon. Ben persuaded me to join him in the betting. At first, I refused but after much persuasion, I relented.

Ben told me to place a small token bet of $10 to $20. He would place a $100 bet. I felt a bit insulted and not to lose face I told him to bet $100 for me too.
He paid $5 admission fee and entered the betting centre while I waited outside. I don't want to pay the admission fee just for a single race. He told me he would relay the running of the race to me via my handphone. It was another 10 minutes to start time and I waited patiently.

Then about 12 minutes later my phone rang. Ben relayed the running of the race to me in real time. It was really exciting. Our horse was leading right from the start and the dividends was $29 for a win. Ben bet $100 for me and $100 for himself on "win" only. If Al Aneed came in 2nd or 3rd place we would lose our money.
" Al Aneed is leading the pack by 3 lengths and its jockey kept looking behind...." said the race caller.
If the jockey keeps look behind and is still leading then our chances must be good, I thought to myself. Next thing, I heard was Al Aneed has won the race by a length. I jumped for joy.

15 minutes later, Ben exited the centre and passed me my winnings of $480 plus my $100 capital. I handed him $100 as a gift but Ben refused. I was pleasantly surprised that Ben did not return to the centre. He told me he was happy with his $480 win and will "fight another day". We proceeded to a coffee shop nearby and I insisted buying him a bottle of beer to which he accepted.
We chatted for a while and Ben left to do some errands for his family. I was thankful I won instead of losing because I have heard of people losing their pants on horses.