My thoughts for the day

The taxi queue at the Changi Airport arrival hall was rather long I thought. I had just arrived on a SQ flight in the afternoon. Usually the queue is short but even if it's long, the waiting time for a cab would not take more than 10 minutes. I had to wait for almost 20 minutes before I arrived at the front of the queue. 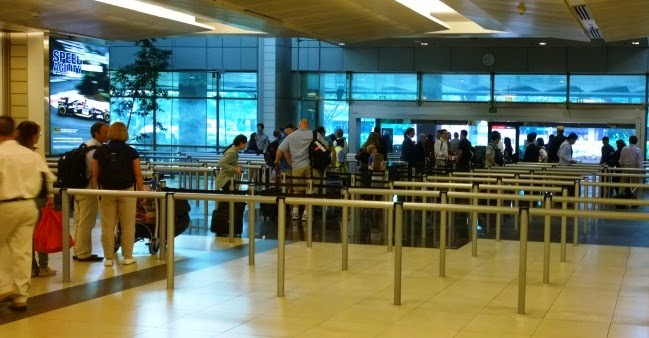 As I was about to approach the cab that just arrived (the taxi coordinator gestured to me to take that cab), a Chinese family of 4 people ran towards it. They came from nowhere. As far I knew it, they were not in the queue. I was visibly upset and so were the people behind me in the queue.
The cabby got out and stopped the 4 from getting into his cab. He insisted that they did not queue for the cab and asked the coordinator to intervene. After listening to the cabby, the coordinator asked the family of 4 to join the queue. Everyone started to clap and applaud the cabby for doing the right thing. I was then asked to take his cab.

For most part of the journey, the cabby and I talked about the incident. He was a relatively young Malay guy. I complimented him for stopping the 4 from taking his cab. I told him he did the right and courageous thing. When I got off my destination, I gave him a small tip of $5. He was very please.

Recently, I was at a buffet lunch in Orchard Road. This place is very popular with the locals as well as the tourists. It was a Japanese restaurant. By 11 am, the queue was a mile long. Even if one made a reservation, one would still have to wait in the long queue.
Ok queue aside, the sake sashimi is perhaps one of the favourite dishes among the dinners. Whenever the raw salmon was being replenished, the one in front of the long line will scoop almost half of it,leaving the other half plate for the rest in the queue. Why must people be so ungracious or should I say kiasu or greedy? And you know what? These kiasu people were mostly Singaporeans!
There are many negative things to be said about Singaporeans as well as the so called foreign talents here but I think the above will suffice for the moment.

Now I would like to comment about the protest currently going on in Hong Kong. I support the people of HK in staging the protest. All they are asking for are the basic human rights i.e. democracy. They want to have a free choice of the candidates for the position of their chief executive or equivalent of a governor. Right now Beijing will select the choices of CE for the HK people to vote.
I hope the wishes of people of HK will be granted by Beijing.

Talking about the motor accident in Christchurch involving a SIA co-pilot and 4 cabin crew, I have this to say: Do not drive in a place where you aren't familiar with the roads. But if you must drive then you should not speed and drive with caution,observing their rules. Heard the seriously injured chief steward was flung out of the car because he did not wear his seat belt.
I have spent 35 years with SIA and not once did I join the crew for a car ride in a foreign country. I've engaged professional local drivers to drive me around. As far as I can recalled, I've only drove twice in Australia. Frankly, I prefer to fly than travel by car in a foreign country example: Los Angeles to Las Vegas vice versa. Many crew like to drive on this LAX/LAS/LAX route when we had a few days stop in LAX.  To me safety is of utmost important.

You may think I am a coward if I were to tell you the following. I would pray whenever the airplane takes off or land. I asked GOD to protect me and all my crew and passengers as well as the aircraft I am flying in. It helps, it gives you confidence to believe the supernatural being GOD will protect you from all harm.
One day all of us will die. We can't escape death. As for me when my time comes I will remember Palsm 23:4 which says: "Yea, though I walk through the valley of the shadow of death, I will fear no evil: for thou art with me; thy rod and thy staff they comfort me."....Amen!

The Lord is good.