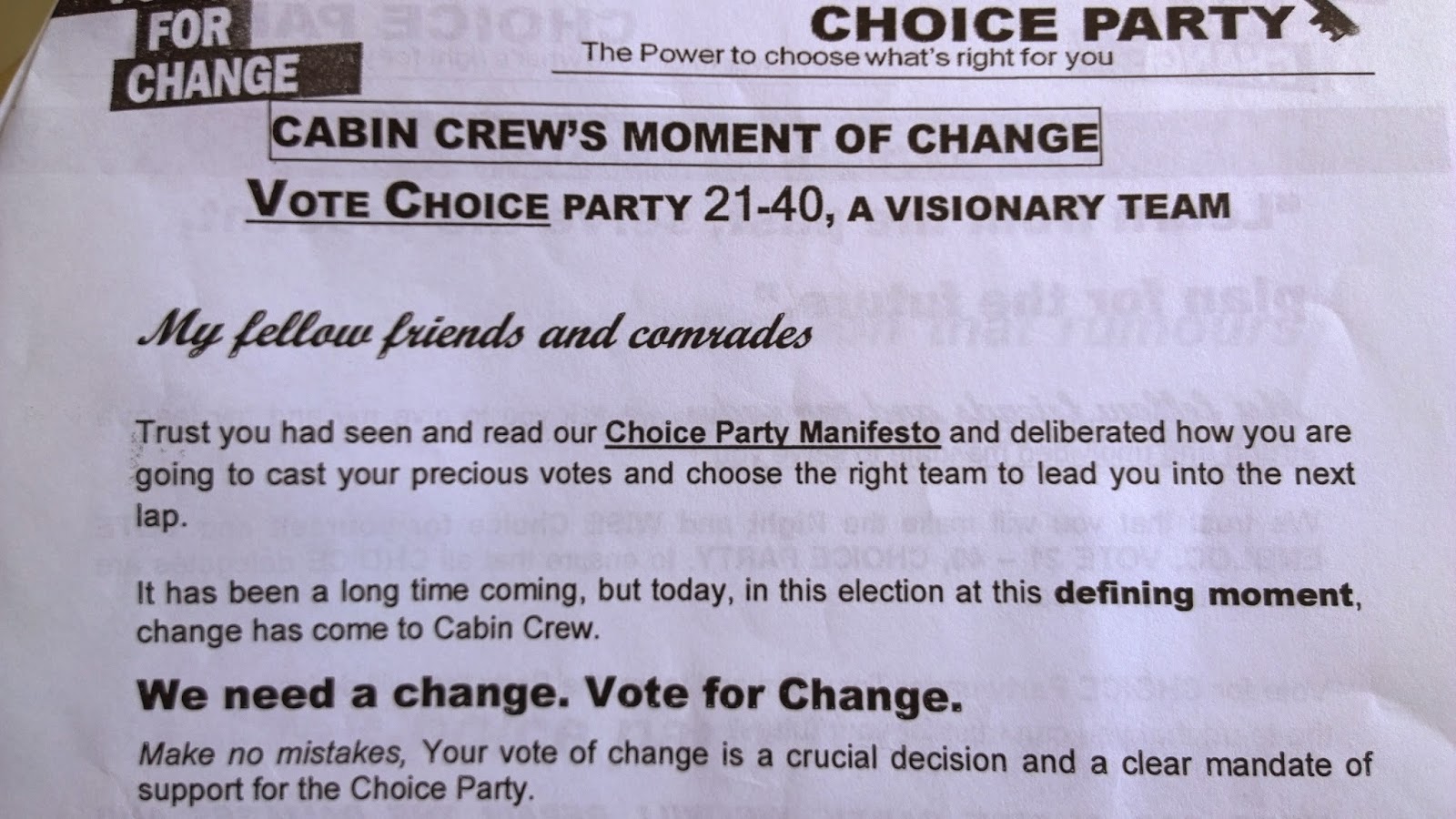 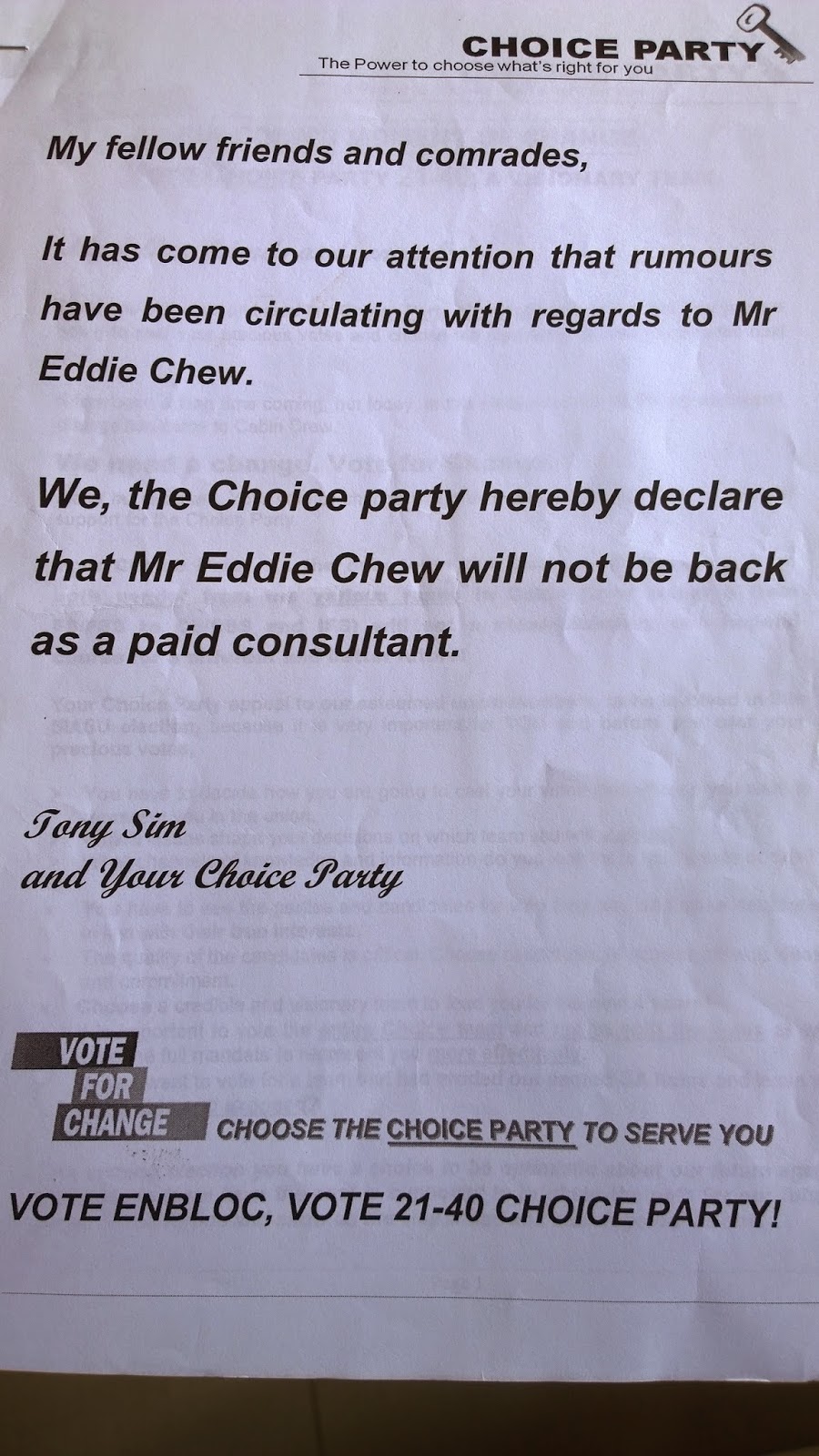 The above were 2 of the circulars given to the cabin crew union members in the October 2010 union election campaign. They were circulated by the party Choice which subsequently defeated the incumbent Heart Party.

The slogan "We need a change. Vote for change" was indeed fulfilled in Choice's 4 years 4 months of rule. The members voted them into power ("vote for change",fulfilled) and there were many "changes" in cc ("we need a change", also fulfilled).  Whether the changes were fulfilled and beneficial to the members (cc or cabin crew) it is for the crew to decided.

However, one thing which is definitely fulfilled as promised was Eddie Chew the ex-president of the union and now retired IFS was never roped in as a consultant to the union.

It will be interesting to watch the upcoming election sometime in March this year.

Voice out your frank and honest opinion at this blog  http://crewissue.blogspot.sg/

Once a Choice supporter said...

The last four years had been a humiliating and devastating one for us in cabin crew. We have been cowed and bullied by the management to the extent many good cc had left. Pathetic is the word. Let us vote for Alan & Heart who could do a better job than all.

Is it true that Eddie instead of becoming a consultant to union is now running a Crappy joint?

Been an agonising 4 years. CC vote WISELY this time.

That was what you axxholes told each other 4 years ago also.
I still remember how everybody tell me vote for tony er.
All you imbeciles are just like the typical 60.1%. cos you never learn and never remember

I will vote for alan

Tony not standing this time? But why?

CC. Vote for yourself. Just participate in ECA, do two courses a year, solicit about ten compliments a year. Life will be good. Do not believe in this Union crap. No one will be able to help you BUT yourself. Whoever win this coming erection, does not make a difference.

"...CC. Vote for yourself. Just participate in ECA, do two courses a year, solicit about ten compliments a year. Life will be good. Do not believe in this Union crap. No one will be able to help you BUT yourself. Whoever win this coming erection, does not make a difference."

Exactly!
Even DI/CI, they will send in the audience to be spectators and watch how you squirm & suffer.

Watch your own backs, do minimal and save enough cash for eventual departure... either voluntarily or involuntarily.

Look out for you own selves.
LoFyo

PJ chap not only Pang Jio but full of
Pang Pui 2.

My opinion is this election Alan PJ Vernon should not contest. Let Toni and company carried on.
There is no value in helping CC as CC are a bunch of selfish lot who will only take care of themselves and will only complain and complain.
CC will be happy to defame and smear whoever the union is.
Alan/PJ/Vernon should just go to work and take care of their family and be happy and wait for retirement and enjoy life.
If there is no contest, Toni and company has no CHOICE but to carry on another three years and getting into all the sh#ts that the ungrateful CC throw at them.

Let Tony run the show for another 4 years? He will be jumping for joy again. he will get his president allowances of 3k a month, h/p allowance and can do all the high yield flights etc. You who suggested this must be his kakia right?
Kick him OUT!!!!!

yaya papaya president. when running for election, he came to meet graded staffs with never-ending smiles. once he won, he doesnt even look at them. Clement is more of a people-person who wud talk to graded stf..

V is also like T. snooty to graded stf but he is very nice to Milan.