Has the CCEs's departure caused the decline in service? 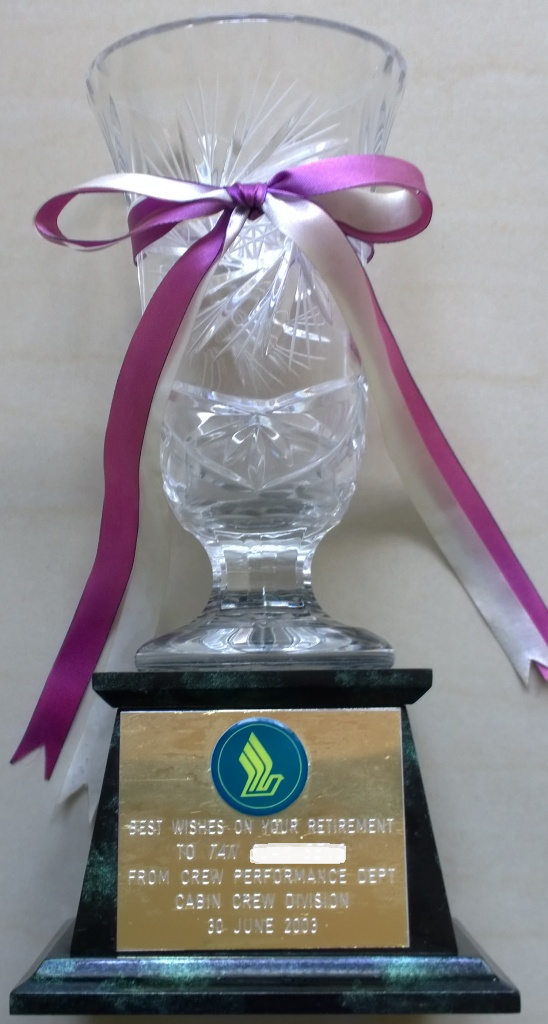 Me and my other 17 colleagues were each presented with this retirement trophy in 2003 when SIA was losing money due to the SARS outbreak. The early retirement scheme was an optional one and a few other colleagues who did not accept the offer continued working in the office. The retirement age was 62. Together with the trophy came the gratuity of a maximum payout of 25 months salary (pro-rated according with the number of years left in service) plus a yearly free travel ticket for self and spouse on SIA for life. We were also allowed to keep the SIA Sports Club membership at $ 8 a month.

Those who did not accept the early retirement offer were not allowed to fly nor train the crew. The position of CCE (Check & Training was made redundant). They were replaced by the IFS (Inflight Supervisors) who became ward leaders and trainers.These ex colleagues became full time office administrators.

About 2 years later, another 2 of these colleagues opted for early retirement. They were accorded much lesser (almost half) of the perks we had in 2003.

We spoke to a few of our bosses (retired since) about the redundancy of our positions and all agreed that it was an unwise move by the company. Services on board the flights plummeted since we left. We are no longer the best airlines, in term of inflight service. We are just average, overtaken by airlines like Emirates. MAS, CX and even Garuda.
I am not saying that our departure had caused the slide in service. Perhaps not. Perhaps it was the calibre of crew we are having today, perhaps not.

We hope SIA inflight service will recover to be number one again.

For SQ to become number 1 top management mind set must change. As of now with the trend they are going being number 1 is only a dream.
The big middle eastern airlines have taken over no doubt now they are the ones setting the standards in the airline industry.
SQ has lost its touch and one must be blind not to see it.
No offense to the cabin crew who are reading this comment.

CCEs were amongst the best group of people to work with. They are unlike a management staff who doesn't even know the duties of a cabin crew but yet has the cheek to comment on crew performance. If there is something to feedback, one could inform the IFS..proper channel, man! but oh, maybe he wants to earn brownie points!

Good to hear from BT that his retired bosses have agreed that sending off the CCEs was a mistake. Anony 1 has rightfully endorsed the achievements of big ME Airine. He is refering to Emirates.

Emirates had adopted some of our ideas. Upper Deck Lounge and the Inflight Chef are two examples. SIA is becoming more and more like a statutory board where meritocacy is only a label worth nothing. Emirates could not have made it without its British mentors. The SIA story began with consutancy and support from BOAC, as it was known then.

Competence is preferred over the bigM... What we are seeing today is a group of bosses with impressive academic papers cloning through a maze, ending up with...if only????

The SVP of CC who was resonsible for clearing the CCEs is such an example. Only bosses who are cheap, greedy and self-serving only stoop that low ending up only to find themselves in shame never before. Just look at what the govt is now doing to win back the trust of its people, especially the resident of Aljunied.

Well, early retirement for the CCE was indeed a sad chapter in SQ..I have joined SQ in de 90s and has seen de glorious days when SQ crew were highly regarded as world number one crew.Now,we are tired,sad and frustrated bounded by constraints set by the company.We no longer are able to soar like we used to as we have limited resources that are being taken away due to cost cutting measures.
The current adoption of the Inflight Auditor are not making things better.Firstly,most of the IFS are there to serve their term like serving the National Service for 2 years.They have no power,no say in de CC division as they are not even in the mid level mangement.When you appraoch them for help or advice,they often cant do much as their "hands are tied"..Service standards has dropped in recent years and so has the ranking for SQ. CC no longer sets standards but instead has opted to accede to ridiculous request made by their frequent flyers.Memos issued to accomodate personal preference are now a common thing and sevice deviations are more rampant now as each passengers tends to make use of their status to abuse the system.Many a times, service standards are also set by "non flying managers" who dont even know anything and IA are just there to execute and be a messenger..Ranking for SQ is no longer important for the SVPs.They are more concerned about KPIs and profits..Who cares whether you are number one when you are in the red..
The day the old guards left, I saw the downfall of CC..Sad to say, SQ will never be number one again..