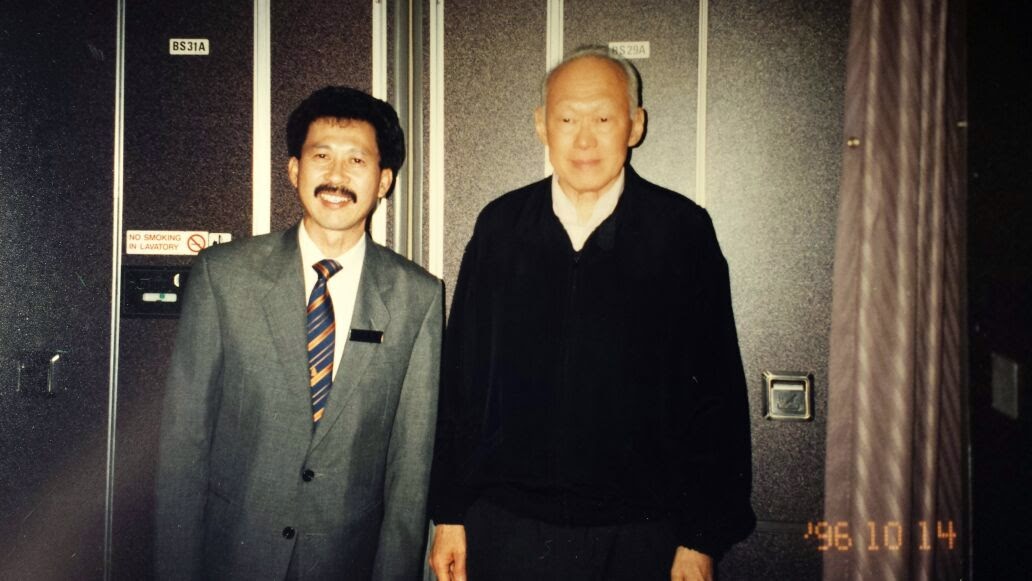 "I was honoured and privileged to have served him on 8 occasions, from LS to IFS, during my career with SQ. The last time I served him was in 1996 when I had the photograph with him. LKY as a passenger was usually not friendly nor did he show himself approachable. So it was not convenient to approach him for autograph or photograph. That pic was an opportunity after he came out of the toilet. My crew in the FC were also fortunate to have a shot with him. It was on this flight that his bodyguard had apparently complained about me for not upgrading his subordinate to FC. He also complained that the camera flash affected LKY's vision. Later CC issued a circular forbidding crew taking pic with him." ....Ex CCE Edmond Tay.

LKY maintained a serious demeanour during the flight because 'Between being loved and being feared, I have always believed Machiavelli was right. If nobody is afraid of me, I’m meaningless'.
Lee Kuan Yew, Oct 6,1997

He had always been an ardent admirer of Machiavelli. This is a common trait with leaders who are power hungry. Those who have read Macbeth will know that the main theme of this sonnet was all about vaulting ambition. Only their achievements are publicised. Their failures and mistakes somehow are very often muted. To be exposed, they will need to be unearthed.

His home address was 38, Oxley Rise, Registration plate of his hearse 8898, total number of pall bearere 8, ancestral home built in 1884 and time of death recorded as 3.18am. This man certainly is a staunch believer in the numeral 8.

Was there any man in the world whom fought for his people .... For his nation....for his country... Without expecting anything In return.....
There was ... Those days ...
Che Guevara....Nelson Mandela..... Martin Luther king
Rest in peace my comrades

Yes... all these crew from yesteryears wanted to take pictures with just about any celebrity.

nothing more than trophy hunting.
When I was a complex leader I disallowed any intrusion into any pax's privacy.

Not even under the guise of:
"Can I just check the amenities box, we need more tissue paper..."

All for the purpose of wandering into the cabin just to peek at the celebrity.

Of course I was not loved either.