Why aren't cabin crew getting along well with the pilots ? 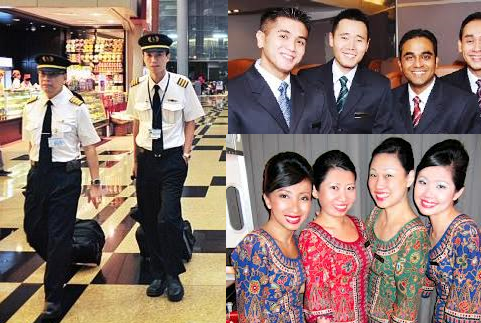 There are many reasons why the pilots (technical crew) and cabin crew or flight attendants are not the best of friends. Most stewardesses and pilots get along well but not the stewards.

What I am going to say may not be 100% accurate. However, there are some truth in what I am going to post here.
You may also read this>> http://www.bohtong.org/2015/02/a-spat-between-captain-and-cabin-crew-6.html

Not a waiter but a professional cc said...

The tech crew always "look down" on the cc and treat them as waiters and waitresses. Don't blame them because cc management is the main culprit who treated cc poorly.

The girls come to us due to our high purchasing power. We do not live in subsidised HDB flats. Marrying pilots will give them a better future. Stewards can't afford nice luxurious cars let alone condo and landed properties. The main purpose of girls joining cabin crew is hook pilots.

That is true stewardesses a number of them are willing to whore themselves to pilots to have a better life. It cant be helped

It is well known that the relationship between pilots and CC has never been good. This is prevalent amongst crew of airlines all over. They may appear to be friendly out of work. This takes a marked change when they are in uniform.

Rank and power can be very desructive elements, particularly when abused for one's own ends.

Food and drinks issues are the most common cause for disputes between pilots and CC. This is not going to end at all and MGT if fully aware of this. Some eat to satisfy their hunger while others eat to the point of gluttony because of greed as they are not charged.

A commander with many years of flying had amassed a fortune and was worth millions. His reputation with a ferocious appetite was well known, not only on flight but also in his neighbourhood. He had a habit of consuming the cold dish from the large ss tray in PCL, ate every course and even packed beef which he claimed was for his dog.

In his old age, had to live with dementia and had to be tied down. Physically, he was still in good health but, his mind was wearing off and found himself doing lots of things that no no one could believe. He was obsessively greedy, a miser and cared only for himself.

I know of an IFS who would prepare cheese, crackers, dried fruit ( the cheese was the entire selection and sliced into individual portions ) and served it on a large presentation plate, complete with grapes to the pilots.

This was done whenever a full lunch or dinner was served in J class. The pilots appreciated it very much that each time 2.5x IFA was achieved. Also, when dinner, lunch or b'fast allowance was based on 2-3 mins of chocks on.

To capt A only. Cc always ride the bicycle then u guys over take and bring home

Lol I think it's is kinda dumb to hook onto a pilot because they are "rich"? When they hv to retire at 62, they are no longer rich (unless they hv been wise and frugal with their $) and with their lack of real skills in the corporate world there's nothing much they can do to stay employable .

To above ,
to be honest, I am CC , we are no better, we retire also no skill,
at least TQ get to save more and faster than us, so the bottom line is be frugal and save while you can, so that one day coy tell u are not needed, no need to beg and cry for extention.

Dear Pilot do you know what is the minimum requirement to apply forthe position of a pilot with SIA? It's A level Or Diploma. My friend who is a captain now got in with an O level cert but obtain his flying licence oversea before he joined. You don't need a Degree to become a pilot. A level or Diploma is enough, just like CC.

Izit true the pilots will not date a stewardess if she has a steward before? Bcos my stewardess friend told me her pilot bf say so lor

To capt A ......
U are a frog in the well ur pay is no big deal in these times. Sg is no longer like 10yrs ago things have changed . U are still thinking u hv a big fat paycheck kena screwed Liao Don't laugh die me

Majority of the cockpit crew are a bunch of cheapskates.Period.Some of the silly FSSes were treated like their amahs or worse sex maids,during nitestop,washed their underwears and stood to make Maggie mee for them,with their sanyo pot,hoping that they will leave their wives and children,for them(Fsses),wasting their youth for the married cheapoes.

Seems like some or most cabin crew are never happy.. Not happy with pax, with their own cabin crew colleagues, or the tech crew, their union, their management...their job, their salary, or with everyone and everything....maybe even with their own selves. They are also not happy that the tech crew with the same crappy educational qualifications as them are paid much more, and do nothing but eat and read newspapers.I'm sure there is nothing to stop them from applying for the tech crew job, and make it as well. After all, it is just the autopilot doing the job, and they just sit there doing absolutely nothing. Such a simple and easy job, why not go for it ?