The comment by "Ravi P" in the first part of the post (below) may be true to a small extent. "Because the crew will offer you tea,coffee, well presented first class meals and kowtow to you lah. You would be the highest ranking crew on board! Please dont be delusional that crew love you... past or present".

The majority whom I met these last few days do not have to suck-up to me since I am no longer with the airline. They could have snubbed and ignored me but on the contrary, many came up to me and shook my hands.They are simply nice people..
Alan,the leader of Heart party was my trainee 33 years ago and he has always been polite and treat me with great respect. PJ was in my ward many years ago. He is the head of the Unity party which is contesting in the union election and is a gentleman even though he knew I am in favour of Heart winning the election. He does not have to acknowledge my presence but he did and in fact he bought me lunch the other day at T3. Vernon, the chief of OneVoice shook my hands and we had a chat a few days ago.

I met many cabin crew whom I knew and they were as nice and courteous toward me. They do not have to make drinks or serve me food like they did when I flew with them but some still buy coffee for me and some of the retired crew who were present at control centre.

One female inflight supervisor came up to me, shook my hands and complimented me for looking younger than my age. I remember her as a young stewardess in my ward some 20 years ago. I visited her in the hospital when she was sick and she did not forget. She still looked good despite being in her early forties.

Danny, a trainee of mine 25 years ago came up to me and pat me on my back. We chatted about the good old times for almost 20 minutes.

There were many cabin crew who are naturally nice and kind unlike some peers and senior people I've worked with.

That "Ravi P" who commented in my blog (I suspect) must be one of those asses in the office.

The Whatsapp message (below)was sent to me by an IFS. He has been faithfully reporting to me the number of votes cast at the end of the day for the last 4 days. Today, he is away on a flight and have asked another crew to report to me. Look at the tone of the message....isn't he nice and polite? He does not have to treat me with such respect but he chose to. I have left SIA 12 years ago and he as well the other crew do not have to suck-up to me. Come on "Ravi P" don't judge other people by your poor and selfish standard. 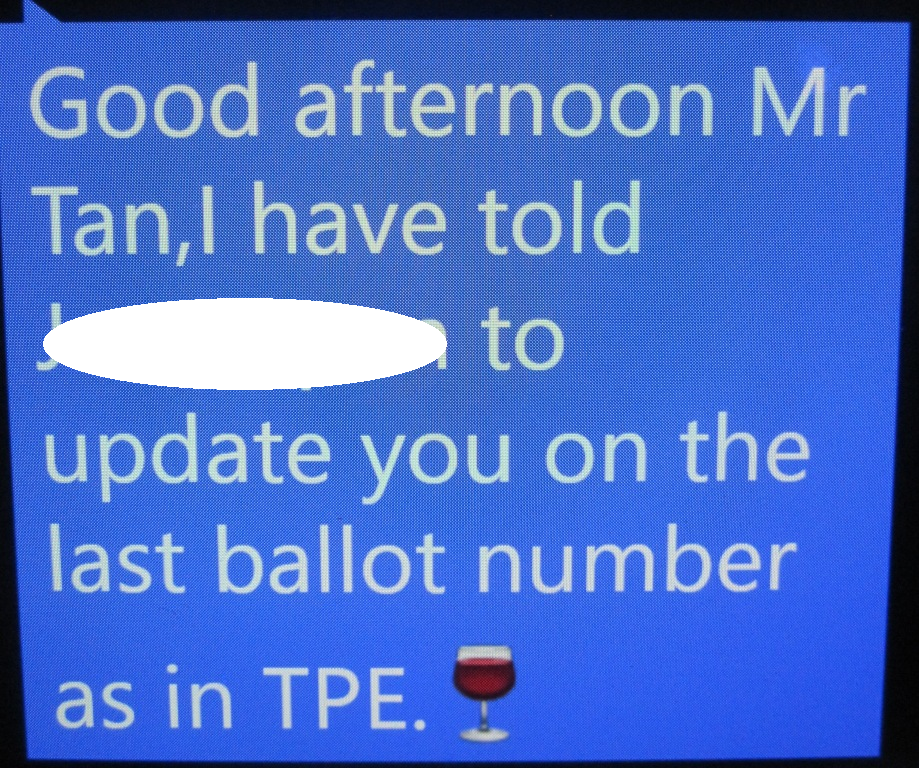 There is a BIG difference between management staff and the crew. The former are concerned with their KPI and will used the crew to their advantage to further their ambitions whereas the crew are humbled and unpretentious people who merely carried out orders so they could bring home some "bread" for their families.