SIA a charitable and non-profit airline? 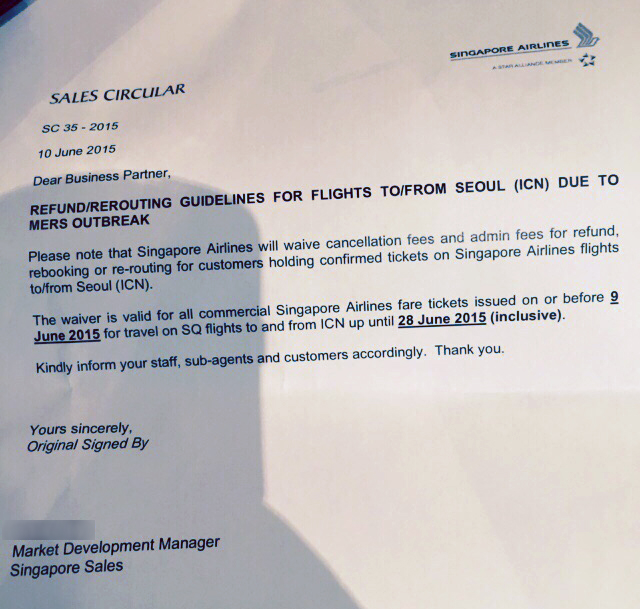 In light of the MERS outbreak in South Korea, flagship carrier Singapore Airlines (SIA) will waive cancellation fees and administration fees for refund, rebooking or re-routing for customers holding confirmed tickets to and from Seoul's Incheon Airport, it announced on its website on Wednesday (Jun 10) More here

SIA is gracious enough to extend the above to its passengers even though there is no travel advisory against travelling to Korea.

Perhaps the next waive of cancellation fees etc will apply to Beijing due to  severe air pollution or to certain countries where one may be subject to being robbed, raped or have the potential of having earthquakes, floods etc.

SIA might as well be a charitable airlines transporting people for free. No wonder it's voted as one of the world's most admired companies, ahead of Microsoft, Facebook, Exxon Mobil, Pepsi Cola, JP Morgan Chase and other giants.

Thank goodness I have liquidated all my SIA shares!

SIA has no choice but to waive the cancellation/admin fees for refund due to a complaint by
a pax's mother in the ST forum http://www.straitstimes.com/premium/forum-letters/story/penalised-trying-avoid-mers-hit-country-20150610

People are demanding these days and not ashamed to ask for refunds,discounts. When they arrive late and the flights have taken off the would ask for refund plus compensation. When the service is not up to their expectation they demand for free tickets as compensation. When they complain about the service they expect sia to send them chocolates and flowers. What shameful beasts we have on this planet!

Ugly sinkies have a high sense of self importance and self entitlement. Very poor upbringing. First class education but third world manners

We can understand if the government has issued travel warning. SIA is
too kind or has too much money to throw? Don't cast pearls before swine.

They have not removed the fuel surcharge.. though they did reduce it.
Why surcharge?
Their "other fees" are also ridiculously high compared to Delta, KLM.
Aviation levy?
Pax service & security charge?
Airline insurance?

Might as well pay for use of the toilet too.

It's okay to waive charges due to circumstances beyond control as in MERS. Not first world education, but First world literacy.....lowly educated. SIA had been cheated too many times as seen in tie-ups and taking stakes in foreign carriers. The Rolls Royce deal may have been political. Why the sudden change when Pratt and Whitney engines have been reliable all along?

"Why the sudden change when Pratt and Whitney engines have been reliable all along?"
All because Rolls Royce has set up a major plant at seletar and generating jobs for
the poor sinkies!

SiA is like Army. Nothing happen / No one complaint. It's ok.
Army refuse to accept "outside" Doc's MC until a NSF died.
SiA cont to take off even in extreme weather when other airlines grounded in HKG.
Oni when things happen / ppl died / ppl complaint then take actions.
What's new?