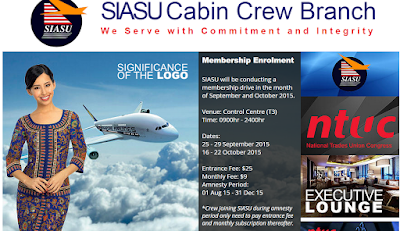 
Since the new cabin crew union committee members (Heart Party) had been elected in April this year, many crew have approached them for assistance. The crew may or may not be members of the union but nevertheless, Heart Party people have been busy helping them. Some of them have issues like rostering, annual leave, off-days, medical leave,hotel accommodation, cabin crew complement,discipline etc.

You won't believe this but the Heart people went into overdrive, clashing with management over work issues as well as crew welfare and what have you.

Unlike the previous union committee,the Heart people freely circulate their phone numbers and even create a few forums for the crew to register their grouses and clarify work issues. These unionists do all the extra work for free. Mind you they have their own flying jobs too. Union work have caused many of them to earn less but most do not seem to mind.

I understand about 1,000 crew have resigned from the union since 2010 when the last committee was elected into power. Heart is now trying to encourage them to rejoin the union.

Holy lord almighty its like watching a sinking ship happening right infront of your eyes no matter what union represents CC's in the end they can only talk the talk but cant walk the walk.

In the past, a career in being a flight attendant was doable.
And labour representation was beneficial. You could work up to 55 years.

Why bother to join? Not being a member will not be a disadvantage anyway.The point that the union represents you in a DI,CI or whatever is just plain scare tactics.( PAP style)

If you are innocent or never do anything wrong, u can stand on yr own and save the monthly subscription. If you get yourself into some DI or CI shit, union cant save you also. Even for non members they will still fight for you. During Sars, a lot of crew who joined union also kena retrench. So join union and waste money for what?