Is it safer flying as a crew these days? 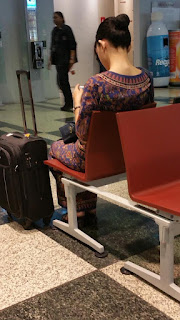 Is it safe to be flying as a crew these days?....I was asked many times by people who want to join as cabin crew. My answer is yes. I personally feel safer in the air than say driving a car. Even with all the terrorists threats and sabotages? was another question asked. My answer is still a yes.
If you look at the statistics, billions of people travel by air each year and how many really die in air crashes? The answer is not even 1% but the percentage rises with people dying on the roads and killed by terrorists like the one in Paris, Ankara,Mali etc.
Frankly speaking, dying while in the air, be it in the plane being shot down by a missile (MH 17 over Ukraine) or bombed out of the sky ( MetroJet over Sinai, Egypt), is less scary and worrying than being held as a hostage and latter shot dead by the terrorists. Death in the air is liken to falling asleep and not waking up. It's unplanned and not premeditated and so the element of fear isn't there.

As a cabin crew, you would probably be too busy taking care of your passengers and your work than thinking of dying in the air. The only time, I was reminded of dying while in the plane was when there was a severe thunderstorm or extreme bad weather. In fact, I feel more scary driving or crossing the road (with the lorries, buses, reckless and inconsiderate drivers on the road) than flying.

Therefore, to those who want to join as cabin crew my advice is.....don't let the current negative news in the media discourage you for wanting that "dream" job.

why risk your life flying? i am sure there are many better and safer jobs on ground

Furubaby you may be on the black list. You may try again but if you keep failing then it's confirmed you are on their black list. Because yours is a medical condition the ban may be forever. The above is my personal opinion only and in no way representative of SIA.

Furubaby they won't entertain you.