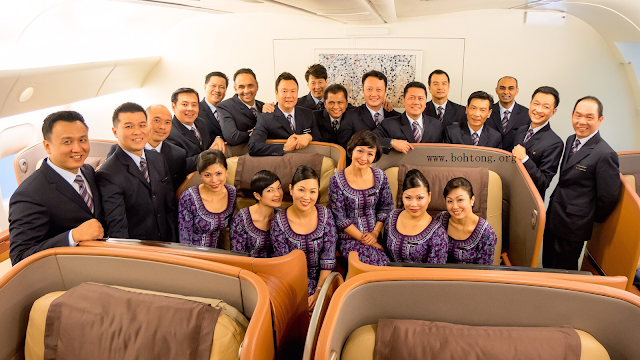 This newly promoted batch of Inflight Supervisors (IFS) started their solo flights after a gruelling 4 week training. The average age is about 40 years. They looked smart and we can count on them to be exemplary and provide good leadership to cabin crew. It is not easy to be promoted to the rank of IFS these days as the competition is tough. There are many capable Chief Stewards and Chief Stewardesses worthy of promotion but the number of IFS vacancies is limited. This time round, 22 of the very best CS/CSS were promoted (6 females and 16 males).

In 1974, 41 years ago, 18 of my colleagues and I were promoted to the same rank of IFS. Ours was the first batch. The average age then was 30. Prior to 1974 the most senior rank in the cabin was that of Chief Steward. The position of IFS was created when SIA started flying the B747 also known as the Jumbo Jet. Today, the position of the IFS is still relevant as SIA has in its possession the Super Jumbo A380.

Congratulation guys and may you continue to enjoy flying for a long time to come!

why is it more stewards than stewardesses? im not in the industry, just curious.

Because stewardesses resigned in more number than stewards.