An exemplary employee, a would be ideal cabin crew 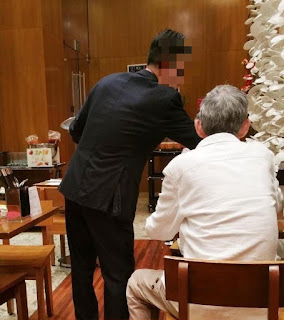 Joe is the manager of the restaurant which I now frequent. It is not so much about the food that I like about this place but it is about Joe. The first time I got to know him was when he personally approached me to recommend the dishes that I should eat. His recommendation is always on this line " I'll get you something that is healthy and not too oily ". He impressed me with his right attitude towards not only me but other customers as well. If you do not want to order a drink, he will offer you a "cup of warm water" to go with your meal.
I told him he would make a good inflight supervisor with SIA or any airline for that matter. He told me he tried to be a cabin crew but without much success at the interviews. Joe is now about 50 years old.
Another thing that touched me was that he recognised me on my second visit to his restaurant. He addressed me by my name and I was very impressed after all I am a nobody.
The second thing that touched me was during that visit, was the statement he made "I feel so happy to see you again Mr. Tan".  How many front line staff or even the cabin crew would say that to her passenger?
When he presented me the bill, I tipped an extra $10 besides the 10% service charges.
Besides being a charming guy, I noticed is well-liked by his staff.

Its a pity SQ is unable to see those who have the the potential to be cabin crew instead they would rather hire half a$$es to fill their ranks. SQ loss someone elses gain