It will be foolish to fight "Goliath"

A flight steward who sued Singapore Airlines (SIA), claiming he suffered a spine injury when a bag fell on him, has agreed to have the lawsuit dismissed and leave the airline following a 21-day High Court hearing that stretched over two years.
Read more
You can't just simply sue a Goliath like SIA. It has lots of money and could engaged the best lawyer to fight its case. Eventually, like the steward, he has to give up the fight. He would be fortunate if SIA does not counter sue him.
I was also involved in a case too whereby SIA  demanded that besides returning my uniforms, keys to my office drawers, gifts etc, upon my retirement, I had to return all those wonderful memories I had while flying for the airline. But how could I ? Subsequently on failing to comply, I was taken to task.

My story is below:
I had returned the keys to my office drawers,the stationary,my uniforms, SIA shares and everything else an employee would have to return on leaving his company. 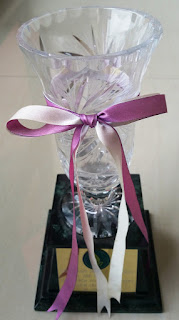 SIA had also asked that I return the house I bought with the company's loan which had been fully repaid. It also asked me to return the multi million $$ gift it presented me on my retirement (picture above...big deal haha) and all the wonderful memories of my flying days. SIA ordered me to keep only the bad ones,like the ones passengers shouted, scolded,cursed and abused me and my crew , the several occasions of turbulent weather where I was thrown about in the planes that almost killed me etc.
I told SIA  I can't return everything,especially the memories. Eventually, it hauled me to court. I was defenceless,without a counsel,whereas SIA had a bench full of lawyers waiting to chew me up.
After what seems like a fiery session and a case which I could easily lose,the judge turned to me and asked me to comply with all SIA's demands including the return of all the beautiful memories of my flying days. I was shocked at the decision. I can't even erased those memories let alone returned them, I thought to myself.
Then,the judge turned to the SIA bench and ordered them to give back my youth, the 35 years of the time I flew for SIA.
At that point of the court judgement, I thought I was going to win the case because it was impossible for my ex-employer to comply.
However, I had another rude shock when SIA agreed with the judge's decision. How ridiculous the whole thing was, I thought. There again,after working for three and the half decades for SIA, I knew nothing was impossible for my ex-employer. The sky was the limit for them, as I was indoctrinated all these years.
When asked by the judge how would SIA comply with his order,the SIA lawyers explained that they had a time machine ready at Changi Airport to transport me back in time to the days before I joined them. In this way,I would not have the memory of flying with them at all.
The judge was amazed with what SIA was going to do and gave the ok.
The next moment before I knew it,I was forced into a time machine with the SIA logo on its door. Before I could fasten my seat belt, the time machine flew off at a tremendous speed, back in time, yes to 1967, the year before I joined the airline as a steward. If this is true, I would be young again, at age 21. My heart began to beat for joy for nothing in this world could give back my youth except the incredible SIA, I told myself.
Then all of a sudden,the time machine made a terribly bad landing. I was flung out of the time machine and found myself on the floor of my bedroom . All at once, I realised I had fallen out of my bed and it was a dream.

On the FS' lawsuit. From the reports, it sounds like SIA had a very strong defence lawyer who was able to weaken the Plaintiff's case. There was a recent case of a European lady who had filed a claim for some millions from a fall that she suffered that led to serious back injury. She was in in Court on a wheel chair. The Prosecution produced evidenc to show that she was able to scale slopey gradient terrain before she attended Court. She was awarded couple of thousands of dollars only.

In Spore that lady will get nothing.

Hahaha. ..BT,I thought your story resembled Shylock and his pound of flesh but it petered out after the juvenile time machine thingy.

It could have been a better story line.

If BT is good in writing he won't be a blogger in the first place. He would have been
a famous best seller author. Talk cock!

Thanks to the 2 above comments even they aren't complimentary.

I think it's good. Ignore the ignoramas.