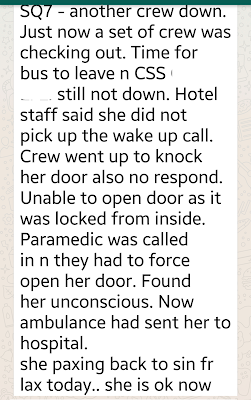 Another close call. Need to practice OK or not OK status, when in hotel.Otherwise think working in Airline so chia lat that crew cannot recover from exhaustion.Means SQ guys tough, proven tough.Any single guys free and easy ?Girls will be asking.

You cannot say exhaustion because crews from other airlines have tight schedules also. If I had to guess, I'd say some these FAs are physically and medically unfit.Time to check their BMI and conduct thorough medical tests.It cannot be a coincidence that they're dropping like flies.

This is like a rubber band stretched to the limit, made worse by the lack of proper rest, nuitrition, locked up in hotel rooms with litte or insufficient exposure to outdoors.

Lack of rest woh. Work a few hours rest 24 to 48 hours. Come back SIN rest another 24 to 48 hours. Tell that to 99% of the working people ourside who work 12 hours a day, 6 days a week. Even office people in cho bo lan STC work about 9 hours a day mondays to fridays then off 2 days only.
As for nutrition, perhaps you guys should stop your 'must have chinese food' sickness overseas. Go frisco must eat thai joint, go paris must eat vietnamesw joint. Go london must eat goomine.
Exercise wise-its up to oneself to go gym or just go for a walk during those layovers. Instead of lying on bed watching those kimchee dramas or surf facebook reading whether your friends ate a old chang kee or drank a koi

They must also stop smoking and drink less. Instead of blaming work they need to accept that their lifestyle (smoking, drinking, gambling, promiscuity,compulsive shopping) makes things worse. Instead of sleeping after a long flight, some still have the energy for additional 'workout' with their colleagues. That will take 7 hours at least depending on their stamina.

Hv a heart guys aren't u concerned abt the sick person instead of bitching abt crew's personal life? They work just as hard as anyone on grd n don't comment something that u don't understand abt crew working hrs.

If anyone wants titillation, Google for some said "fabulous"Middle East Airline as said by their FA social media, being on 24 hours.About millionaire FA per year,thousand per flight etc ,originating from Middle East. Stop the slime on the Crews, being the same nick who always rattle about the same allegations etc.One really need to see a shrink if continue to think such.The Crews could be your daughter, spouse who's is trying to do the job.

I have been a crew for 23 years. I cant go elsewhere cos I only had N levels and I know how easy and relaxing this job is depite all the whining. No other jobs pays me 8k a month for klkk cho bo lan, finding food to eat onboard and idling outstation. I am very grateful for the job and hope they feed me till I die or retire at 67.

"Other airlines have tight schedules too..."

They dont give towels, menu cards, and constantly giving drinks.
They just focus on safety and the main service.
SQ very busy doing nothing of value... so since I am on board,
I ask for all the nonsense: Instant noodles, Chinese tea, lemon tea, and try
all the drinks listed on the menu.

That is why SQ crew shag out.

"They dont give towels, menu cards, and constantly giving drinks."

They do,actually. Which airline you referring to now? SQ is a good company with a good management team but they can't cater for every eventuality, including the ill health of their staff. Employees are responsible for their own well-being. Ownself must take care of oneself and not expect management to do it.

Result of too much aircraft food and drystores overseas. Could not be due to lack of exercise as crew claim overworked etc. So whats the truth?

One more reason the stewardesses are at risk especially for long flights is that some are on birth control pills.

Depending on teamwork.Normally the procedures and SOP were done junior staff who were immediately promoted upward who dont care whether its workable or feasible.For example HKG/SIN in J class service,the end service would be coffee/tea.As usual extra side orders would stretch the service longer and all with take their time on the coffee.Then the aircraft begins its landing sequence and the cabin began to dipped.Still the coffee cups were not being collected.So looks and procedures were overlooked and the trolleys and empty containers for the cups were wheeled into the cabin and collected left and right,table linen and towels and at the same time the tables were being positioned for landing.This was what happened, its not procedures,deemed to be not kosher but safety was the priority,cabin ready for landing.Contrast with case ex NY when the confluence of delays ,service was done on ground.A newly promoted CiC,famous for following circulars after circular who like to micromanage all,took off with the chairtable not in stowed position a serious safety issues,a no no.Heard that he got a warning letter.Rules are good for perfect situation only and adjustment to arising problems can negate all.Similar to VY case,damn if you do ,damn if you dont.Management set the procedures,agreed by the unionist head.Tòo far it might take in friendly fires.Overdone and people can get hurt in complaince or not.The crews are not 3D printed , with perfect built and quality to mesh in with the SOP.Management with the KPI to comply with normally at the opposite side of the crews abilty to perform.The perfect point where it happily intersect seems to be elusive.Until then,Murphy'Law apply.

Only with SQ do you see the cabin attendant calls light up
constantly. For frivolous things:

tissue paper
milo drink... cold please.. ( and then when its served... oh! no ice please :(
Where are we now?
Too cold!
Too hot!
Hot towel please!

Only in SQ.
I dont know why anyone would like to work in a semi hospital.

Honey, it happens at other airlines so stop complaining.
It's getting old.

If you don't want to have to do extra, then don't hold yourself out to be the airline that goes the extra mile. We don't want you to miss your usual cup of jasmine tea, so we went to China to get it for you.The lengths we go to. Wasn't that what your marketing girl said on YouTube?

Don't blame the passengers, the management, the sun, the moon, the sky, your pet rabbit etc. No wonder you're not number one anymore. Nobody forced you to apply to SQ. It's optional unlike NS.

Customers in today's world who look for these "extra mile" service
are the drivers to perpetuate the slave trade.
Go buy your own slave... you have the cash, dont you????