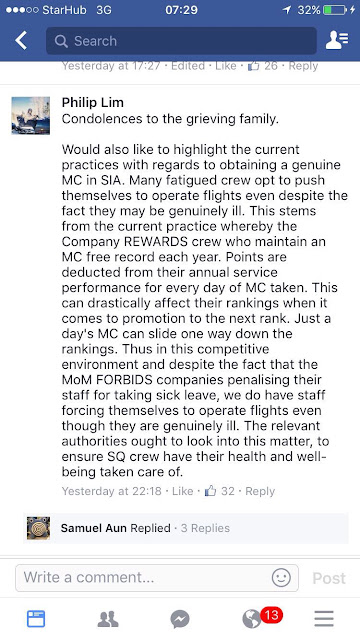 Fair comment? Certainly not. Lots of crew have been left behind in promotional exercises even though they had low or no MCs for years. It is incumbent upon each and everyone of us to take good care of our health and not blaming it on other factors.

Low or no MC already lose to others in promotion and left behind liao. If they dare take MC, maybe climb up list for retrenchment when recession hit lo

What are you guys expecting?

For the deceased to live until she's 80?She was a stewardess not some fitness junkie.

Smoking,drinking,partying,clubbing,gambling,promiscuity and other vices would've been part of her lifestyle just like most of her colleagues.

Don't blame the company for falling sick. If you cannot handle the stress then don't join SIA. Expectations are very high at a company like that. If you want a bit more leeway, join a Malaysian company. If you always take MC, I'd imagine your chances of promotion will be lesser whereas in Malaysia you can afford to go on long unpaid leave or just switch jobs or careers and still make good money. There's a reason why most Singaporeans don't get married and have trouble conceiving if they do. Also the high suicide rate.

You join SIA at your own risk.

It is very hard to get a more balanced life if you're with SIA. So ask yourself what is it you want? What defines you? Money, fame, glamour, status?

Don't forget this happened straight after CNY, which means she probably overate when she went back to Penang so unless she went to the gym often, she would have placed undue pressure on her internal organs. Things would've been worse if she consumed alcohol, smoked and did drugs (recreational).

So don't blame the employer for your poor health but blame yourself for having very poor judgement.

Disagree.Smoking,drinking,partying,clubbing,gambling,promiscuity and other vices would've been part of her lifestyle just like most of her colleagues.
These are to get over no promo.
Why so many change address to STC.
With Alway Malicious and Chief Clowning Executive trying to pad their portfolio and KPE,being top dog is better.Sixteen years an LSS certainly does not look good on their HR or interview book. High expectations ?The selection board should be ashamed. Don't make my toe laugh. The Crew dare not say .period.

One thing I don't get. I would've thought that with 16 years experience, she would've been in the red uniform at least. How come still green?

How come still green? Promotion is the sole prerogative of the employer or its representative. This was the verdict of the industrial Arbitration Court ruling in Singapore when the Pilots Associatin took SIA mgt to court over the promotion of Malaysian pilots who were urged to accept Singapore citizenship as a condition for their promotion to the rank of CPT. The verdict has never been challenged. What more with Cabin Crew?????????????????we are digits.