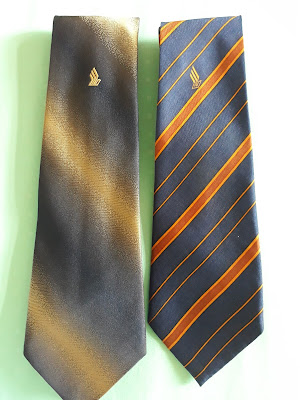 Who'd want to be reminded of such a thing? When you're young and healthy they want you but when the company isn't doing well and you're older and not so healthy, they get rid of you.

Anonymous said...
This comment has been removed by a blog administrator.
10/6/17

Sick of the 2nd Anonymous's blaring nonsense,trying to show of literary skills for what?

2nd anonymous is why hiring managers prefer FTs instead of locals. Our education system produces parrots who cannot think. >69.9% of the population has allowed this to happen.Just look at the new generation of SQ recruits.

Dont forget it was Inflight Services that introduced
lots of services.

Its the CCEs that had to adapt the service on board.
But most of the trial & error was performed by the operating
crew themselves... on the fly.

This was done way back in the 80s... never introduced by Inflight Services
because we never filed a report or submitted it through Staff Ideas.
We cut fresh fruit, soaked it in salt water to prevent them oxidizing
into ugly brown colours.

Created frozen ice bowls to present carviar too. Inflight Service?
Nah!... tons of things was done out of just plain sincerity to present
items, events that would be memorable for customers.

But the managers ignored all these impromptu acts and deemed it "not standard"
They got wind of these things via "feedback" from crew who told tales to the CCE.
(Their ward leaders.).. Because these crew disliked impromptu, off the manual styles.
these CCEs, in turn reported it to managers and so on..
Since then, its been No standard.

So, CCE/TC/IAs are all screwing their own backsides, really.
What to do?.
All have been threatened with job loss and even to this day... the fear of losing
""free " tickets for travel.. damn gong i say.

Anonymous said...
This comment has been removed by a blog administrator.
11/6/17

If FT steal your lunch,then you steal his lunch!

Anonymous said...
This comment has been removed by a blog administrator.
12/6/17

Are you on drugs or what!?

Trying to show off his writing skills and the nonsensical stuff he wrote has nothing
to do with the post. BT should delete his stupid writing!

Ok I have deleted all comments that aren't related to the post subject.