It is gratifying to know that I have helped many cabin crew wannabes realised their dreams. Perhaps, to others, becoming a cabin crew is no big deal but to these boys and girls whom I have helped, it meant a lot to them.
Many have attended interview after interview but without success until they met me. You can see the joy in them when they finally made it.
I can still recall a girl whose father pleaded with her to become an SIA Girl. The father was sick and before he dies, he told her, his wish was to see her don the iconic Pierre Balmain SIA Girl Kebaya. She tried at least 7 times before she was successful and that was after I coached her.
Not only have I helped her fulfilled her father's wish but she and I were jubilant too.
Another girl's obsession was the desire to see her family members meeting her on arrival as an SIA Girl at Changi Airport. She applied for the stewardess job but failed three times. She enlisted my help and after some coaching, she was successful. Recently, she sent me a photo of her family members with her at the airport after arriving at SIN. Below was her Whatsapp message to me. 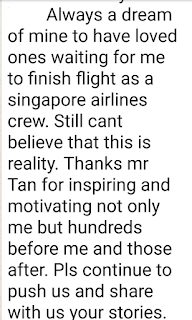 Another case which I will never forget was a boy who failed 16 times. He pleaded with me to help him. He got a copy of my e-guide and attended my seminar. Immediately after the seminar, he passed the interview with flying color.

There were many stories like the ones above but I think these three examples will suffice.