After our mass early retirement in 2003, one of our colleagues who married a relatively young Malaysian  stewardess 23 years his junior left for Malaysia. Many of us tried contacting him for golf, chit chat etc whenever we visited Malaysia but he would make lots of excuses for being unable to meet us. Then after a while, he refused to answer our calls or reply to our emails.
This guy was an extrovert and a fun loving person when he was working in the airlines. We were puzzled at his recent strange behaviour.
Recently, there were at least 2  rumours that he had died. Just last week, we received a Whatsapp message claiming he was dead. Then all of a sudden, we had another message saying his son who is living in Singapore denied his dad has passed away.
Well, another crew aptly sum up the whole situation: 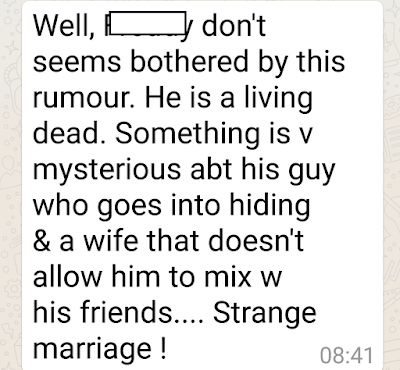