Recent reports by the media regarding cabin crew being asked to take no-pay-leave gives the impression that the exercise is a result of SIA not doing too well. In my opinion this is untrue.
Asking the crew to go on voluntary-no-pay-leave (VNPL) happens from time to time when due to operation reasons, SIA suddenly finds that it has surplus crew.
The reports also give the impression that the VNPL is for all crew ranks and they could apply to go on leave for the whole period of September to November.
For information, the VNPL is confined only to chief stewards/stewardesses (CS/CSS) and stewards/stewardesses (FS/FSS). They may go on VNPL for up to a maximum of 14 days between September and November this year. The newly promoted CS/CSS and newly recruited FS/FSS who are under probation are allowed a maximum of 7 days of VNPL.
Hope the above clarifies. 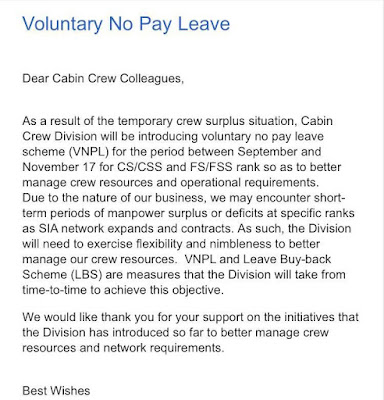 This reminds me of me taking my no-pay leave for 3 weeks in early 2002 to clear my exams. When my leave was about to end, I found out out I was already close to 2mths pregnant. I didn't even bade a proper farewell, never even got a chance to kiss my mailbox. Everything happened too fast and I still miss flying.