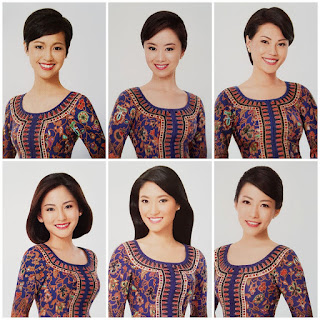 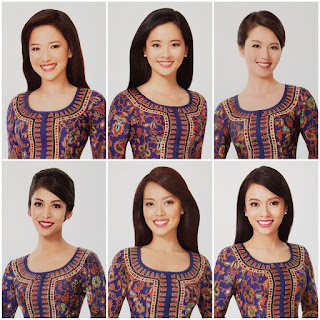 Supply lots on board.When pax complain,offers a signed copy.Pen from there and cold copy use pax pen,hot use FSS pen.Could do with the calender and point which FSS to serve ?IFM and older FSS prohibited.Special offers in Suite Class.

They don't mind being portrayed as sex objects in the calendar but complain when their male colleague borrows their pen and accidentally touches them.

Come I clap for you.

Beauty is in the eye of the beholder.Top left and bottom can deduce darker tan Whether race or whatever or Chinese or Japanese or Korean or Indian ,you will be serve by the local FSS.If you want your own kind or type and want to marry them ,then specify race.Otherwise buy your own plane or use your maid or whatever.It can be any race you want,subject to affordability.Safety and skill the criteria,not race.

What's next, nothing wrong with simply asking instead of grabbing it from the Stewardess chest. Your thinking reflects that of an uncultured individual with no class. Sadly, chances are, you're probably a senior male crew in the airline. It's deadwood like you that need to be get rid of.

Refers to "Mostly Chinese. China airline izzit".Agrees with your comment above,grabbing from the parked pen in the kebaya certainly wrong,a mental lapse.Probably circular will come soon no parking ,only season parking user etc.Fine for other including IFM.But pax,tech crew can?Can ci pax,probably harassment case on landing in Changi.China Airline will soar above SQ in the future,cannot compare orange and banana.

The steward probably lost his cool which is understandable given the high pressure nature of the job. The stewardess should've just accepted his apology instead of getting him fired. Other male colleagues better be wary of this stewardess who doesn't mind getting her colleagues fired. Rat!

All are under 5 years in the job.
Still young and clueless...purrr-fect for office people's intentions.
But no dumbo when it comes to sex.
Pretence is a natural skill, used successfully from interview to
displaying a pen, a flash of skin...

Males are so easily fooled even after millennium.

Its called a Brazillian.

I don't care what it's called,it's still hideous. No better than the hairstyles of Quasimodo the Hunch back and Moe from 3 stooges.

Not alluring and sensual at all.

Need not be long like Rapunzel but not short.

Wow the Steward lost his cool. High pressure nature of job. Much excuses for deplorable behaviour in the airline. Frankly the rat is the Steward and he deserves getting sack. Don't worry sir, if I lose my cool and am under high pressure according to your logic one is permitted to sexually harness women. An apology will do and all is well.
FYI it's really not very stressful, just do your work properly and focus on your duties. if you think this job is tough, go work in the complaints section. There they face the wrath of pax crew conveniently vr about.

The situation on board that causes complaints could be originating from equipment support or server,s fault.Being a CC, the inability and failure to perform to the best could be due to personal issues which being onboard could not be solve,only put on hold.Of course persistant and habitual underperformance risk their long term tenure as a CC.Only the other hand ,complainants have incentive to exggerate incidents with eyes to total refund or other reasons based on where they originate the flight.The CC on board have to use physical and mental while the Complaint Dept have to evaluate and respond accordingly guided by the returning customs for commercial reasons and for the good of the Airline.If needed be,to sacrifice the crew,which may not be good in the long run.CC will not stay longer than 1 term and experiences gone for good and not total losses for all.Therefore the Complaint Dept must identify fake complaints,defend CC in the right and motivate and boost morales if needed and not be dumb to be taken in by good complaint.CC on board will not have the abilities due to their inadequate skills and education to much less counter such fake complaints.In essence dont be a greater fool which of course the CC cannot tell the Complaint Dept.It is not a convenient VR,more an essential and reminder not to trust the comments and so on.The wrath of the complainant is like the Grapes of Wrath,more like a poisoned chalice.Drink it and lap it all up ,wont be good for all.Better to spit out the bad,than be sad,it takes lots of skills to prevent being taken for a ride.SQ certainly can be great again !