A complaint from a "True cabin crew" 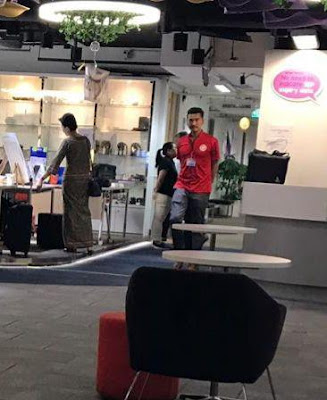 During the voting process, how could someone be so daring
to stand just beside the voting box and represent his party by
wearing their shirt.

Is this allowed for a union elections?

In the name of elections can you do anything?

Are they trying to prove that nobody is above than them?

As far as I remember the Newton’s third law...

Please assist to publish this type of intervention that project a
bad image of unionism.

Please luh only 1 person was alone. Ask that person go go there at 9a.m! The whole voice team was there! He wasn’t even beside the voting box. Get your facts clear!

It seems that the voting box is only a few sq foot so,in a general election versus a group thousand times bigger,one cant complain that a ref tee can sway or influence the candidate.No communication before the slip is tick,so no issues seen,the distance is reduced acordingly to a 2 horse race.Dont overreact,once has already decided aheard before coming here the box.

Not A Mudslinger said...

This whole election saga I have totally understood that,
Heart party seem to be confident to win by a bigger margin.

However they should not use such degrading techniques of standing near voting box like an idiot to display their power.
NTUC officials are currently at the same position to prevent such incidents again. To the above 3 fellows, I do not speak without facts of election rules and regulation.

Hey be a true spirit and win the election through sincerity and work towards the true comradeship of the entire cabin crew rather than doing such disgusting acts of convincing voters to win the election.

Be a man and be sporting. Even animals do not do such despicable acts to get what they want.

For the sake of promotion or self desires, you guys will support anyone or anything or even will sell your soul to ensure your members win the election through such degrading acts.

Disgusting to have even say that we have to work with such humans among the great Martin Luther king and Che Guevara.

You can cheat us but towards God ???

Wow fierce voice supporter!!! Don’t slap words at ur own face!!! Don’t know which Voice LSS pull vote in the 1st day of voting and get her Father down! Of coz change is constant... but to voice...

Just a heart party guy outside voting room during this voting season, and voice is making so much noise. Voice, why don’t you all stop camping at Kopitiam this period too? Come back from flight wanna eat in peace also cannot, come and talk to people, disturb people having meals making the whole atmosphere so awkward. Chinese has a saying, 陰魂不散, or Ang moh u can say it as the ghost if... inexorably hangs on! Stop making so much noise and bad mouthing about heart. When u lose this election tml, make a comeback 4 years later as NOISE PARTY, you might win eventually! Cheers!

Check your history,Voicer,its revolting you use Che,or Martin Luther,but acts by Voicer in 2011 you forget ?The signs are there,Demon advised,Crappy at times trying to get even.Clean and heart to heart acts of kindness,thats what Alan stood for,Voicer given chance in 2011,and what do CC get ?A hit or full of #hit.Service to your fellow man,quote the lines in the Bible,and you serve God.Which line you use ?Love your enemies,for they do not know what they do.Even Voicer by repenting and voting for Heart ,can see the light and enjoy the bread together,so whicu part you are in.May God bless CC.The Crusaders in CC,the Avengers in CC,snap your Power Glove.

Contant ? You mean Constance saved by Subas Anandan,brother of late CS Anandan.Good to know,she recovered,
Saved a crew lately ?Please ponders otherwise how to show all you done the all possible,improbable,because CC is unique,its got Heart.Dont be a Voice in the dark,all talk no action party.Imho.