SATS is offering early retirement besides other measures to save jobs 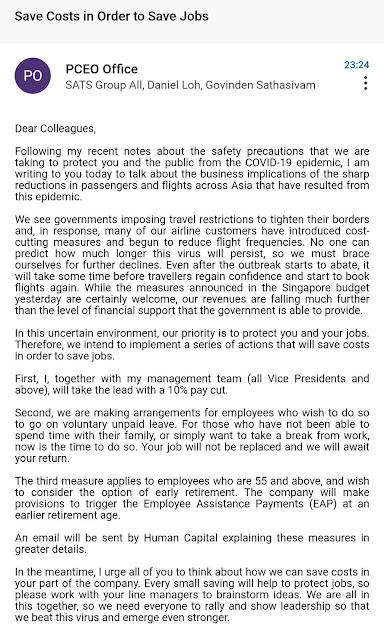 The early retirement scheme which is being offered to all permanent SATS staff is reminiscent of the SARS situation in 2003 with SIA.
One has to remember that the recipients of the early retirement will have to pay a certain portion of the money they received to Inland Revenue unless their positions are made redundant.
The formula for the early retirement scheme would probably be the same as SIA's back in 2003 i.e. 1 month of last drawn salary for every year of service up to a maximum of 25 months. The closer the staff is to the retirement age, in this case is 62, the lesser one will be paid. I was paid the maximum of 25 months of my last drawn salary in 2003 when I had 5 years of service left. Some of my older colleagues got less than me.
Good luck to SATS and its staff!

Ah Uncle BT, the same old cards in the 2003 playbook coming out again! But Lau Lee has gone home... wonder if history repeats itself again and what new cards will be created this time?? Only time will tell.

(But SATS is now no longer part of SQ unlike 2003 days for better?? or for worse)

Hi Tim,
Nice to hear from you again. You are absolutely
right. Let's hope this COVID-19 will go away
quickly.

why want to go away fast? light load, emptu streets and mrt, more off days in the form of uncalled standbys. why not?

Hi Uncle BT, next card out from the SATS deck...

Comparing to SIA (https://www.straitstimes.com/singapore/sia-chief-senior-staff-take-pay-cut-as-air-travel-demand-drops) it seems that SATS is playing the game much more fiercely... next stage to watch is when SATS triggers the full MVC 10% for all its Executive staff (including AOs) :I