Not all pilots are happy

It seems most of the SG pilots aren't happy that there is no retrenchment. They prefer that the company retrench the PRs and ReEmployed retired pilots (aka RRA) instead of resorting to deeper pay cuts across the board. If the PRs and reemployed pilots are retrenched, the SG piolts would not have to take the extra pay cuts. I was told the PRs and Reemployed are the ones who benefit most without retrenchment.

In one of the comments below, one reader accused me of stirring shit. To prove I am not stirring, I reproduced part of a text message which I have received prior to the agreement whereby the company has decided not to retrench the pilots. 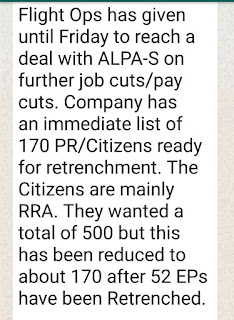 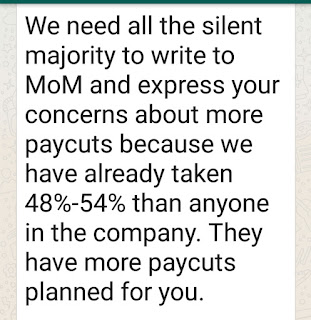 The local pilots are a selfish lot who does not care about their Malaysian colleagues!

In times like these, we unfortunately have to take care of our own. Malaysians have had a very good run at SQ and they’ve had the luxury of being a few years ahead due to locals doing NS. Locals are not selfish and it’s comments like the one above that does Malaysians a disservice and engenders ill will. SQ, please look after the Singaporeans who would sacrifice their lives for our country. PRs do not have the same depth of feeling or understanding and have for too Long benefited from an unfair system that has continually penalised us for doing our duty for our country.

The Malaysian Pilots have always benefited from the company at the expense of the Singaporeans. They can join at 18 , get command by 30. No need to do national service. No reservist liability. Singaporeans barred from joining till 26. They have to join the Airforce instead, unless chopped during training and deemed unsuitable for Airforce flying. Singaporeans continue serving reservist duties up to 40 days a year till 50 years old to defend the country. During this time away, they lose out on sectors and flying hours plus allowances. The Malaysians in the meantime are happily collecting sectors,hours and money. The Malaysians know that the system has always been to their favour and advantage, and should accept the fact that in such situations like now, Singaporeans will have to come first. As it has turned out, it is now equal misery for everyone regardless of nationality. I don’t think the Singaporean Pilots are unhappy that their other colleagues are not retrenched. All this is spiced up to stir shit by certain quarters ... BOH tong included. Just sharing this so ignorant people can get their facts right..

Well, you cant make everyone happy. So matter of everyone fighting for survival now. It just human instincts.

Pilot got better union? They are making the Singaporeans pay to keep the Malaysians employed.

Time to get rid, once and for all, the Malaysian excess. We must keep our Singaporean pilots employed.

Anonymous said...
This comment has been removed by a blog administrator.
21/9/20

I agree with Anon #2 & #3 as they rightly pointed out the unfairness of NS reservist Singaporeans males do after starting their work life.

They've lost 2 years of potential earnings and job growth. Yet, those 2 years means nothing to private sector employers.

The reservists itself is something every NSman dread - a complete waste of time.

In comparison, the M'sian and other nationalities be it pilot or cabin crew can cross their legs and shake and exclaimed 'Where got time for NS?!'

Bo Tong , please do some housekeeping and not publish those nonsensical and idiotic posts with no sense of proper English grammar and spelling. I’m referring to the above 7th post.

Thanks Yes I do agree with you. Will have it deleted in a minute.

Time to get rid of the pr cabin crew as well. Why do the singaporean crew have to share our flights with the pr Malaysian crew.

Seems that CC do not have the PR versus local problems.U derreported and mentioned.Only the bigger moneybag matters.No wonder CC,whether Local or foreign,feels neglected,poor poor cousin from the village,destined to be poor for life.Do you feel the same or am I wrong ?

Well,if the vaccine were appoved in the future,the cargo plane shall be in demand for shipping it worldwide,under -80 degree.So dedicated and probably subsidise by WHO ,the vital distribution chain.Pandemic can only be stopped by vaccination worldwide,in the timeframe.

fire singaporean pilots and hire at lower rate, like what LKY has once mentioned.

singaporean crew treat passengers like dogs, why keep them? quality over nationality.

When CC learn to speak and write correct English, then perhaps there may be a little more sympathy. As it stands, you can't string a sentence together. Try and have a half decent conversation with CC. Largely impossible! And I'm sorry, but you cannot compare tech crew with CC and I don't need to point out the reasons why.

Anonymous said...
This comment has been removed by a blog administrator.
21/9/20

" And I'm sorry, but you cannot compare tech crew with CC and I don't need to point out the reasons why. "

And this, so that you know, is why you’ll never rise above your station in life. Regrettably quite pathetic in many ways.

You may not know this secret: in realtime mode, driving Grab/Gojek is the best job that you can get into if made redundant from the airlines..
No point working for others as Manager of this and manager of that. You are wasting your time and life doing other jobs. Only idiots look for other jobs.
Don't waste your time and intelligence and start looking for job.
Lease a car and go on the road. You will enjoy the job if u know how to go about it, such as doing things at your own time and own target. U get the privilege of the usage of a car in Singapore which at the same time is a money making machine, plus coupled with the opportunity to be free - freedom from..... simply because even if you are not driving nobody knows. They thought u are busy driving and very hard working. Of course you can also work hard and make good money. Freedom is the key word for this job. Any other jobs are for idiots unless u can come across a good paying one. Otherwise this is the job up for grab. See pay song ah.....

Anonymous said...
This comment has been removed by a blog administrator.
22/9/20

Is this person on something? Boh Tong, you have bizarre standards for your comments section.

Nope, I do not have "bizarre standards". I am just being patient not to hurt someone who has spent so much time writing long and "bizzare", out of context comments. However, when it goes too far, I will delete the comments.


“And this, so that you know, is why you’ll never rise above your station in life. Regrettably quite pathetic in many ways“

According to you , cc cannot be compared to Pilots , if Pilots so good
Why all so scared and trembling when come to retrenchment ?
Because come out also cannot find job lol...

Last anonymous, you give me a migraine just reading your post.